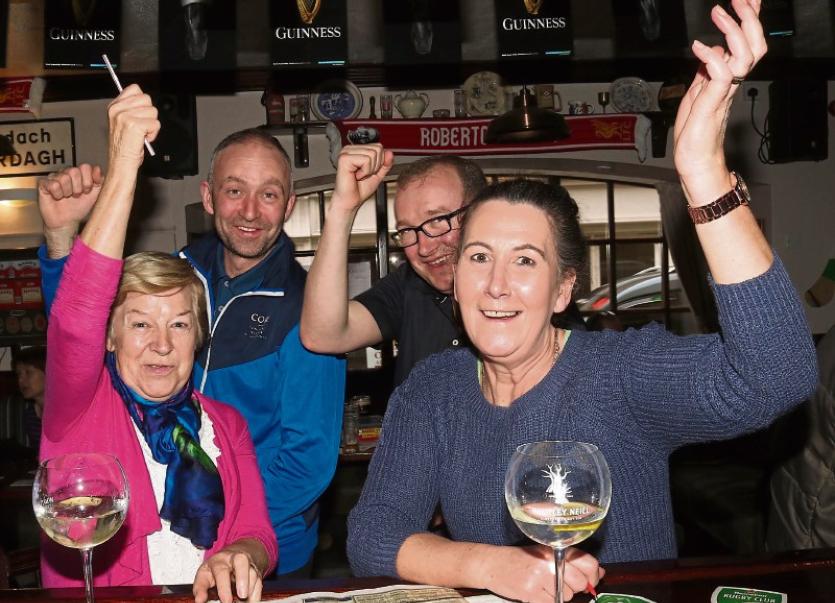 THE poet’s son at the high bar had it right. Quoting his father who described “lovers like homing pigeons”, he might well have been describing Newcastle West’s racing fans and their ongoing love affair with Cheltenham.

With the lunch hour barely gone, the Cheltenham fans homed in to the screens and bar counters, clutching the racing pages,  eager to get their fix, determined to knock a bit of fun out of a grey March day.

If they couldn’t be in Prestbury Park, well, then, why not a high stool and a big screen close to home.

In Lees on the Square, Jimmy Lee sat patiently, Buddha-like, secure in his long knowledge and history of Cheltenham.

“I used to go every year until two years ago,” he said quietly.  He misses it now but a pew in the family pub is the next best thing. His son, also Jimmy, is also a veteran of the festival. And he had no problem explaining exactly what the fascination is. “It’s everything, the big quality races, the deadly atmosphere. It is pure festival.”

In Whelan’s in Maiden St, Gearóid Whelan presided calmly over  the first day of the festival. The build-up was only beginning, he explained and the crowd would be getting bigger every day. “Friday will be a huge day,” he predicted.

“Most of the lads here are on holiday for the week,” he continued, looking around as his brother Brian handed round big bowls of Irish stew. In Whelan’s  the niceties are observed.

“We hand out dinners. We feed them. We do free offers.”

Gearóid also phones in his customers’ bets in advance of each race. A small but vital service. Most punters are not big gamblers but the appetite to have the edge is keen.

“It’s pointless going for the favourite,” declared one man, ready to bet each way on Wicklow Brave in the feature race of the day, the Champion Hurdles with its £256,275 prize money.

He was prepared to bet against the reigning champion Buveur D’Air, owned by JP McManus. His bravery however was misplaced this time out.

Bridget Kelly was not one to waste her time on favourites either.  Just her favourite jockey. “I always follow Davy Russell, the jockey. He wouldn’t be one of the favourites but he is a good jockey,” she declared. Her canny bet on Davy and his mount, Mick Jazz, paid off when he came in third.

But the majority were backing Buveur D’Air, ridden by Barry  Geraghty. And as the action on the racecourse intensified, the tension and excitement in the bar rose to shouting pitch. Come on Buveur, come on, they roared, punching the air, leaning forward in their seats even as Barry Geraghty rose in his stirrups.

But Buveur D’Air, roughly translated from the French, as a drinker of air, was aptly named. With lungs of phenomenal capacity, he kept going, he kept ahead, he kept in the race, and better yet, he kept his backers in the race.

And ready to be buveurs themselves.