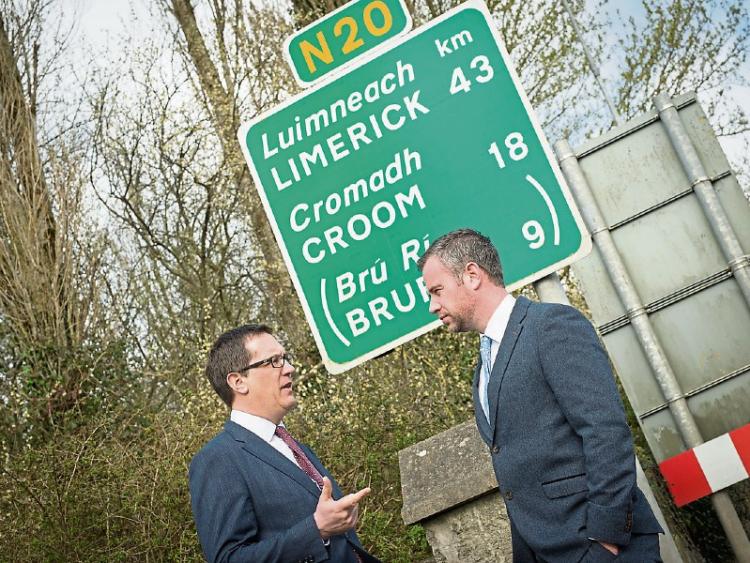 LIMERICK’S road network stands to benefit significantly if all the projects identified in the National Framework Plan secure the necessary funding and reach completion.

The most-talked about big ticket item included in the plan is the M20 motorway from Limerick to Cork at a cost of €850m or more.

Welcoming the investment, the Minister of State for Finance and Public Expenditure, Patrick O’Donovan said the project is “is due to commence the planning stage.”

“The largest cities outside of Dublin must be connected in a first class manner and this is happening because Fine Gael have put the country in a position to do so,” he said.

Extensive work and significant amounts of money were already expended on the M20 before the project was shelved a number of years ago.

This will now have to be reviewed, according to Kieran Lehane, director of services with Limerick City and County Council.

“We will be required to revisit the basics,” he explained.

And this, he expected, would involve looking at traffic origin and destination in a study area from the N20 to the N24. It is likely but not absolutely guaranteed that the previously selected route will remain the same, he explained.

Reacting to the M20 announcement, government backbencher and Fine Gael TD Tom Neville said: “I would ask that the TII be very considerate and work very amicably with all landowners that will be affected by this. It is essential that their needs and farming needs are met as best as possible in any future consultation process. I think that is paramount that the least amount of effect on farm holdings be adhered to, and that a robust and interactive communication process be put in place.”

But the completion of a new road, bypassing Adare and linking Foynes to Limerick and the national motorway network is of huge interest locally, both in terms of traffic congestion at Adare and the development of port business in Foynes.

The road was included in the government’s €40b capital spending programme of 2015 and since then considerable progress has been made in selecting a route and in producing a final design. The 33km route is expected to cost about €200m and the council expects to be submitting the project to An Bord Pleanála for planning permission by the middle of this year.

If this goes ahead, and if there are no hold-ups, this project could be well up the list for funding.

Two other items have fallen under the radar somewhat: distributor roads for Newcastle West and Abbeyfeale.

The Newcastle West distributor road will become increasingly crucial once the Adare by-pass is completed, according to Mr  Lehane,  as the town will become a pinch-point. Abbeyfeale is already struggling with traffic congestion.

“I am delighted that the N21 Newcastle West and Abbeyfeale Bypasses have been included and that they will be progressed through pre-appraisal and early planning in 2018,” Minister O’Donovan said.

“Most of this has already been announced,” Deputy O’Dea said. “I think this is the fourth capital plan that they (the government) have announced in the last couple of years, and what I find absolutely fascinating is that they are making such a big issue of the proposed Limerick to Cork [road].

“That was on the capital programme previously and it was taken off by the then-Minister for Transport Leo Varadkar three years ago, and now suddenly they are making a virtue of putting it back on when they took it off in the first place."

Limerick Chamber CEO Dr James Ring has welcomed a number of elements in the plan, most notably the M20 to Cork which the chamber championed and also the Limerick to Foynes road.  However, he said that deeper analysis of last Friday’s announcement suggests that the region’s capacity to help address current economic imbalance on the island has been largely ignored in the plans.

This, he said, is a missed opportunity.

Fianna Fail's Cllr James Collins was critical of the fact that only the Coonagh Knockalisheen section of the Northern Distributor Road was included. Work on that section is currently underway.