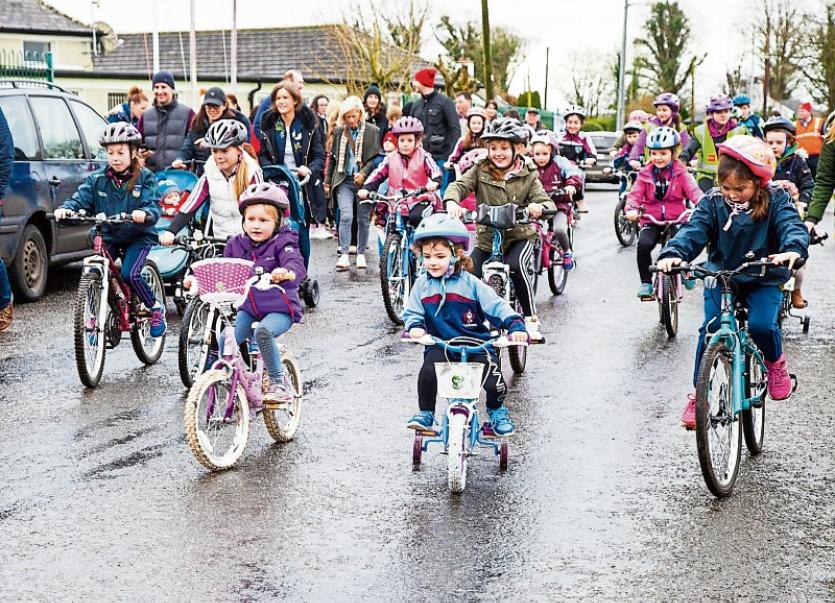 HERBERTSTOWN National School is going to give a lesson in endurance next June.

The school has just launched the  fundraising challenge which, as far as they are aware, has never been attempted or completed before.

Mike Fitzgerald, teacher, said parents and staff will attempt to travel from the lowest point in Ireland to the highest in less than 24 hours.

Mike and seven parents will cycle from North Slob in County Wexford, which is three metres below sea level, to the foot of Carrauntoohil.

When they arrive in Kerry there will be no chance to put their feet up as they will join with more Herbertstown NS teachers, parents and relatives to climb the mountain.

Mike says that everybody has heard of going from Malin Head to Mizen Head but they wanted to come up with an idea that was different.

“There is a nice ring to it – going from lowest point to the highest. I know it is going to be a fairly big challenge, the cycle alone will be a monster challenge. It will be interesting to see if we can finish the cycle and if we can take on the mountain then but that is all part of the challenge,” said Mike.

The other brave and hardy souls who will accompany him are Caitríona Farrell, Shane Clifford, Graham Power, Paul Monks, Kevin Higgins, Gary O'Sullivan and Brian Mulcahy.

To ensure they reach Carrauntoohil during daylight they will have to start cycling the 270kms from the North Slob at 1am or 2am.

They held an official launch in the school for the mammoth adventure on June 23 and as the photograph shows, the children are getting into the cycling spirit.

“There is a great buzz in the community and in the school because the pupils obviously do geography and know the highest mountain in Ireland and the different counties. They understand it is a big challenge. And because there are parents involved they are very invested in the challenge,” said Mike.

He and the other participants will be putting themselves through the pain barrier for the boys and girls and future generations.

“We are building on an extension to the school in the near future and we are raising funds to improve the outdoor play areas/spaces along with the new building. You can put on a classroom but often the play areas are forgotten about.

“With PE coming on stream as a Leaving Cert subject from next year on, we see it as very important for our pupils to have top class outdoor facilities and play areas. We are trying to generate as much as we can and really invest in the school. It is growing in size – we are close to 130 pupils,” said Mike. A percentage of the monies collected will go to Cliona’s Foundation and Crumlin Children’s Hospital as they wanted to support children’s charities.

Participants can be sponsored personally or by logging onto www.herbertstownns.ie  where you can donate online.