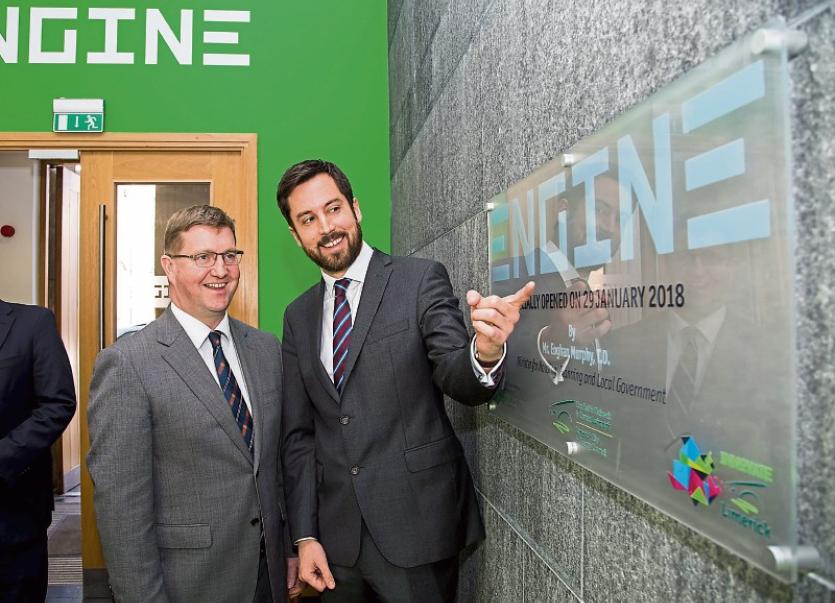 Mike Cantwell of Innovate Limerick with housing minister Eoghan Murphy at the opening of the Engine building in Limerick Picture: Alan Place

ANOTHER 150 jobs look set for Limerick after it was confirmed Innovate Limerick is seeking to expand its new €2.25m media facility.

The Limerick Leader can reveal that the local authority is set to buy the former Office of Public Works (OPW) building in Upper Cecil Street to facilitate a huge increase in floor-space at the Engine building in the former Dominican Biblical Institute.

It will represent a rise of 25,000 square feet in floorspace, and it’s hoped it will generate 150 new positions in the heart of the city, Mike Cantwell of Innovate Limerick said.

The move comes just a week after Environment Minister Eoghan Murphy cut the ribbon at the facility, which already provides space for small firms to develop, as well as the local headquarters for WP Engine, which is ramping up to 50 staff this year.

“Given the level of demand already and interest already, we think we can expand it,” Mr Cantwell said, “Our view is to create the space, get innovation, get jobs and the rest will follow.”

He explained this is part of a three-step process for Innovate Limerick, which runs Engine, which could end up with the purchase of the former Theatre Royal, and it’s potential use as a cinema.

“We are effectively tripling the space we have with this move,” Mr Cantwell added.

Fianna Fail councillor James Collins, a director of both Innovate Limerick and Limerick Twenty Thirty, said the Engine building has been “a runaway success” since it opened.

“Such is the demand for this type of space, there’s a need for more. The adjoining building in the OPW became available, and it made sense to build further. We keep saying there is a strong supply of companies which want to come and set up in Limerick. They’re looking for space initially to incubate before growing into a final bigger space,” he added.

Meanwhile, 50 new jobs are on the way to Castletroy.

Council bosses have given the green light to change three units in the towering Dublin Road building from being used as retail to office, research and development and light industrial use.

While J&J were not available for comment this Wednesday, planning documents show that the application will see the firm “expand its investment and employment in the local economy.”

The building will provide a research and development centre, conferencing facilities.  Light assembly of machinery will take place for demonstration and development purposes, the documents add.

The move comes after the University of Limerick bought the building, with J&J – which also has a base in the National Technology Park – providing training and development to undergraduates of the college.

”The proposed staff numbers will be 50 persons, not all staff are expected to be on the property at the same time, with a portion of them travelling and working remotely,” the application adds.

Opened in 2006, the Park Point currently only houses a Travelodge hotel, and a branch of Cafe Noir.

In a further jobs boost this Wednesday, 4site opened a Fibre Centre of Excellence in Raheen.

Fine Gael Senator Kieran O’Donnell has welcomed the potential jobs boost, saying: “It’s exciting the fact they are going into the area of robotic technology has to be very much welcomed. It’s something that I want to wish the company well on.”

Communications Minister Denis Naughten was present to cut the ribbon at the development, which will bring 20 new positions.

4site exists to design, build and maintain network infrastructure for owners and operators of distributed networks across Ireland and Britain.