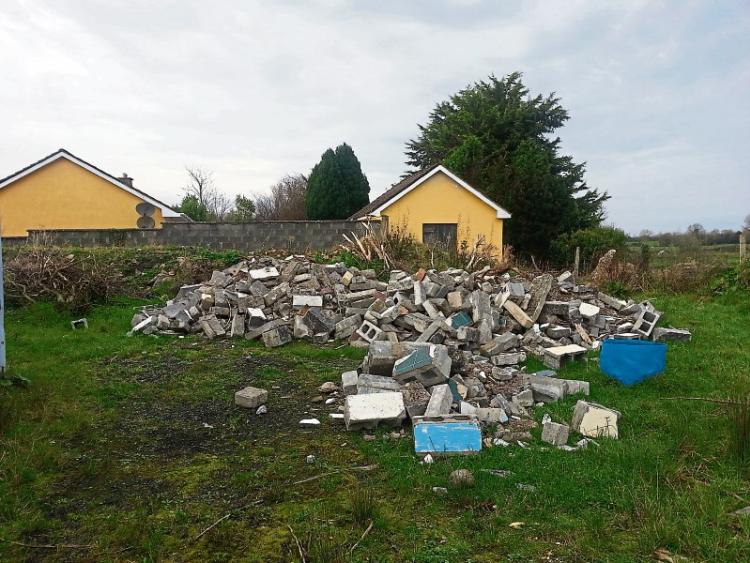 ‘Unsightly view’: The woman is living next door to a pile of rubble and a number of containers in East Bunratty, which according to the resident may even include the kitchen sink

CLARE County Council has confirmed that it has issued an enforcement notice for alleged illegal dumping in the Bunratty East area.

It is understood that the rubbish being dumped relates to demolition waste including rubble, steel, glass, nails, cardboard, lino, tiles and barbed wire.

A concerned neighbour Geraldine Fitzmaurice who lives close to where the illegal dumping is allegedly taking place, said she is “exasperated” talking about the issue.

“The dumping has been going on for decades in the field but in the last six months it has gotten out of control and has become unprecedented.

”The proprietor has definitely dumped the contents of somebody's old house into the field,” she claimed.

According to the concerned neighbour the presence of the rubbish in the area has led to her seeing rats around her home.

“I contacted the EPA and I understand that they are sending out inspectors to view the land,” she said.

It is understood that the woman has approached the proprietor on the issue on a number occasions.

The neighbour is also concerned about what the neighbour is storing in containers on the site added; “It’s on a new level and it's whole sale dumping at this stage, everything is in their including the kitchen sink.

” I don't know whats in the field, there could be asbestos in there and I wouldn't know.

“Somebody came in with a dumper truck five times and dumped the rubbish in the field. The field is at an appalling level at this stage.” she added.

A spokesperson from Environment section of Clare County Council said: “A Notice has been issued by the Waste Enforcement Team, under Section 14 of the Waste Management Acts requiring the site owners to remove all waste by 18th December 2017.”

“Clare County Council encourages members of the public to submit information relating to waste enforcement or littering matters so that the Local Authority may investigate and resolve all incidences of illegal dumping.

"Clare County Council uses CCTV as a standard tool for investigating waste enforcement complaints. Incidents of illegal dumping may be reported by members of the public to the Environment Section, Clare County Council, by telephoning 065 6846331 or the Anti Litter Hotline 1800 606 706.”