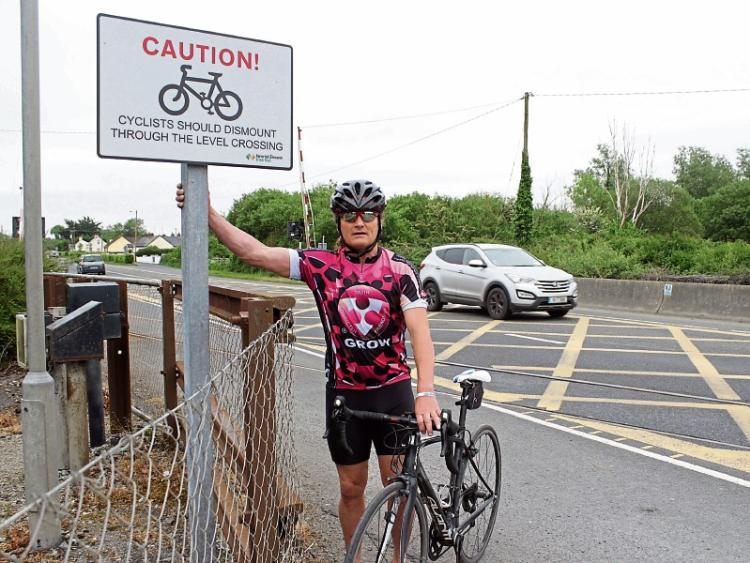 Richie Clifford pictured on a previous occasion at the rail crossing on the Limerick to Castleconnell road Picture: Michael Cowhey

LIMERICK’S Mr Motivator Richie Clifford has said he is “lucky to be alive” after being knocked from his bike in a hit and run.

Richie was cycling with two others on the old Dublin Road in Limerick this Tuesday at 11am and was approaching the rail crossing near Herbert’s Pub, Sallymount, Castleconnell when a dark navy Fiat Punto hit a young rider with the group.

“He was on my outside so he was pushed into me and the both of us went absolutely flying. The road is 20 yards wide and we were both on the inside. I’d say we were fractions away from being mangled to death. We wound up in the middle of the road. If there was a car or truck coming behind we were dead. We are lucky to be alive,” said Richie.

The wing mirror broke off the car in the force of the collision. The incident happened 300 metres from the crossing, said the well-known fitness instructor.

The student cyclist hurt his hip, shoulder, lower leg and his bike worth €4,500 is smashed to pieces. Richie’s shoulder was injured in the fall. The third cyclist escaped unharmed.

“I am not saying the driver did it intentionally. They might have taken their eye off the road, been on the phone or fixing the radio, but they struck us and kept driving,” he said.

The incident has been reported to Castleconnell gardai who can be contacted at 061 377105. Richie is asking anybody with any information or businesses in the area who have cameras to contact gardai.

“We don’t know the sex of the driver. All we know is that it was a dark navy Fiat Punto with no left hand wing mirror because we have it. The car is between 2005 to 2012  – it is on the serial number,” added Richie.

Mr Clifford had previously warned people cycling over the rail crossing to dismount when passing over the tracks.