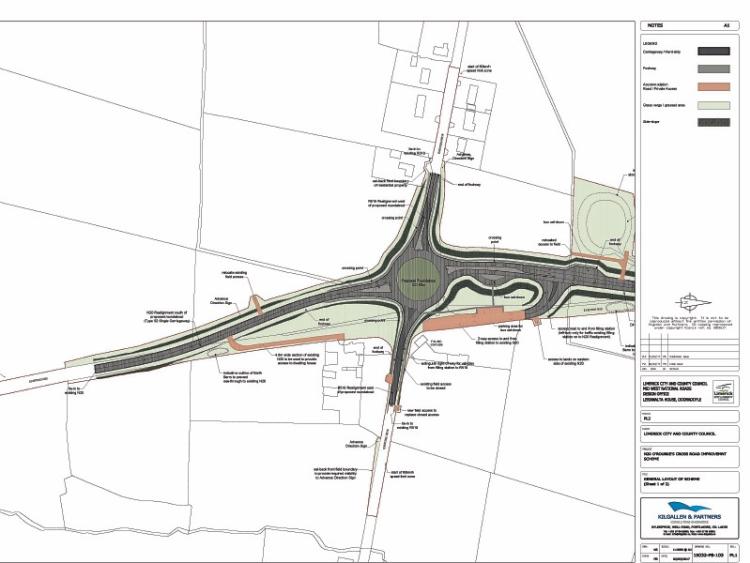 THE €2 MILLION roundabout project at O’Rourke’s Cross near Bruree is driving ahead despite the handbrake being let off the M20.

The dangerous junction on the N20 links Limerick and Cork and Newcastle West with Kilmallock and south Limerick – locally it is known as the Bruff line. There is also a busy shop and filling station.

Tim Fitzgerald, of the Mid-West National Road Deisgn Office and consulting engineers gave local councillors a presentation on submissions received after it went on public consultation. Mr Fitzgerald said a roundabout was planned as part of the original M20 plans, albeit not as large as the one in the pipeline.

“We are not building something that will be obsolete. It will be larger because the M20 was not in place [when they were designing it]. There are residual problems at this junction,” said Mr Fitzgerald. If all goes to plan the roundabout could be in situ by 2019/2020. The very best case scenario for the M20 is 2025.

There were nine submissions including from Cllr Mike Donegan. He “strongly recommended” that serious consideration be given to adding a fifth arm to the roundabout to go directly into the filling station, and relocating both bus stops to the parking area. Cllr Donegan also submitted the right turn providing access to the filling station “is too short and thus can potentially cause talibacks to the roundabout”.

“The shop has been there for 90 years. We are going to isolate the shop. It could be a rest stop for motorists, a bus stop hub to promote Bruree, Kilmallock, Bruff, all south Limercik - Smarter Travel. It is the first business you see after coming into Limerick and we should advertise how we do business,” said Cllr Donegan, who added that there were plenty of examples of roundabouts with five legs like in Mitchelstown. “This is unfair on the business and bus users. I can’t support the four legs,” said Cllr Donegan.

Cllr Lisa Marie Sheehy said she had spoken to the Beechinors, who own the business. “Safety of motorists is their first concern.  I feel the four legs isolates the shop. Whether it is four or five leg it is definitely safer that what is there at the moment. I have a concern about the traffic turning right into the filling station,” she said.

Mr Fitzgerald said they had considered five legs but there is a 60% higher accident rate on five leg compared to four leg roundabouts. “We have to design to the TII’s operating standards,” said Mr Fitzgerald.

Director of service Kieran Lehane said to councillors: “Be careful proposing something that is less safe.”

Cllr Eddie Ryan said motorists “take their life in their hands” at the cross. “My own view is the new access will enhance the business. The previous four elected councils have craved this. Let’s grasp it and move forward,” said Cllr Ryan, whose proposal was seconded by Cllr Bill O’Donnell. It now goes forward to the full council.