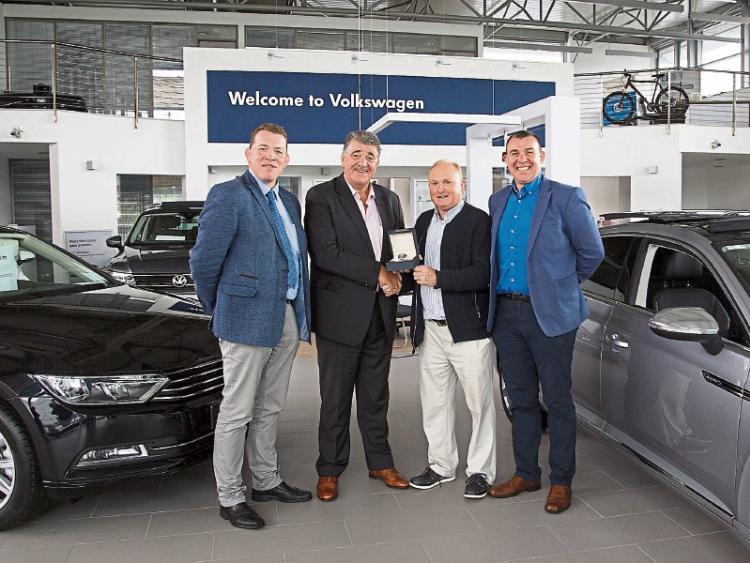 IT was an occasion for celebration and reminiscing as staff members at Frank Hogan Motors came together to celebrate a remarkable 40 years' service for parts manager Pat Foley.

Established in 1973, Frank Hogan Limerick welcomed Pat Foley to their team in 1977, and Mr Hogan was very complimentary of Pat and his work ethic, as they worked together through the development of Frank Hogan Motors over four decades.

Mr Foley, 58, joined the team as a fresh-faced 18-year-old when Jack Lynch was elected Taoiseach, rugby stars Ronan O'Gara, Peter Stringer and Marcus Horan were born, a pint of Guinness was 43 pence and you could buy a house in Dublin for £23,000.

While a lot has changed in the motor industry in 40 years, so has the personal life of Pat Foley, who now is married with two daughters. The Patrickswell native thanked all his colleagues and well-wishers for their kind words and looks forward to continuing to lead his team at Frank Hogans for many more years.

As the motor industry continues to change, one constant has always been Mr Foley, as Frank Hogan describes his importance at the Dublin Road dealership.

“Things have changed a lot in the motor industry in 40 years but the one constant has always been ‘service’ and Pat is integral to the delivery of excellent customer service."

The two men shared memories of starting out on the motor trade journey, when as well as Mercedes cars, they sold Mercedes heavy vehicles and tractors and extolled the virtues of the Mercedes tractor, a few which still toil today down in West Clare.

After Mr Foley thanked those in attendance, he looked forward to many more years in the motor industry as a new era of the electric car is set to take the industry by storm.

With many technological developments during his 40-year service, Mr Foley wasn't fazed by the latest development in the motor industry as he has overseen many advances and changes during his time.

He added that it demands a skilled team to deliver the level of service required for today’s motorist in an ever-changing world both on and off the road.