Vets and Limerick Animal Welfare save one of afflicted animals 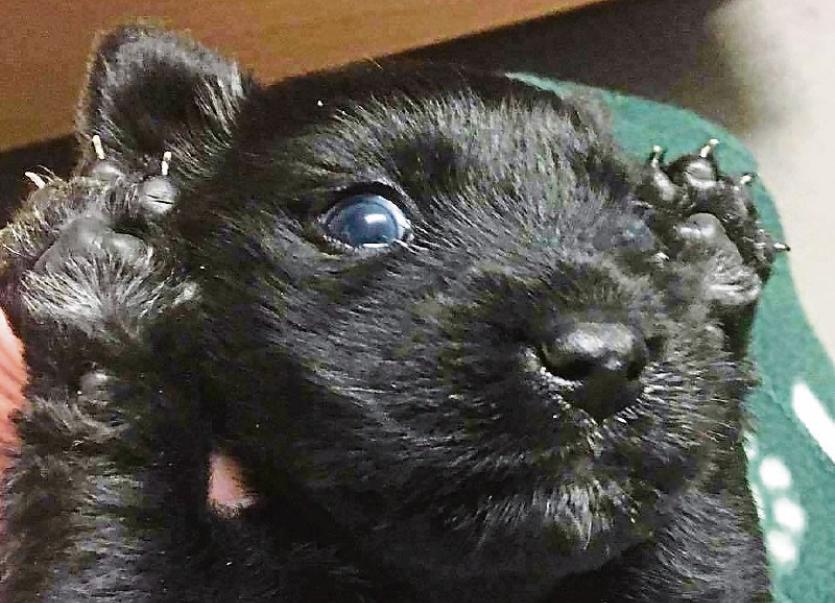 GARDAI are investigating a “shocking” animal cruelty case where a litter of pups were put in a bin bag and thrown away like rubbish.

It is believed some may have been killed prior to being put in the bag but there was one still alive. A resident in Glencree, Newport was in her garden when she heard whimpering coming from a tree behind her property.

In a black sack hanging from a branch she found a litter of new born pups, most of whom were dead. The one that was whimpering was taken to Mulcair Veterinary Clinic.

Cathriona Murphy, veterinary nurse, even took the Labrador cross home and bottle fed her for a couple of nights. Once strong enough she contacted Limerick Animal Welfare (LAW) in Kilfinane who continue to care for the puppy called Honey, now three weeks old.

“There was actually blood on her – she was probably only after being born. The vets did a very good job, they saved her life. The practice rang us to ask would we continue the bottle feeding.

“Honey is three weeks old and fine now. She was very small when we got her,” said Marie, who heard the other pups had been killed. Gardai were called by the person who found the pups and attended the scene.

Cathal Misteal contacted the Leader to highlight the animal cruelty case after hearing what happened from another neighbour in Glencree.

“It is absolutely shocking and disgusting. Myself and my wife are big animal lovers. Whoever did this, I would be afraid they could do it to a person in the future, that is what would worry me. People like this should not be near animals or children,” said Cathal.

Marie said their sanctuary is overflowing with abandoned and mistreated dogs.

“There is no end to the back yard breeding and puppy farms – it is out of all proportion. You only have to look at the website, they are going up every couple of minutes,” said Marie. Lurchers are the most common abused dogs.

“We have 20 and they all come in with mange, broken bones, full of fleas, emaciated – it is crazy. It is mind boggling that nobody in the government is doing about the animal cruelty situation,” she said.