Suspicious death in Bunratty now under review 33 years on

New inquiry into death of Patrick Nugent, but family fear justice will not be served 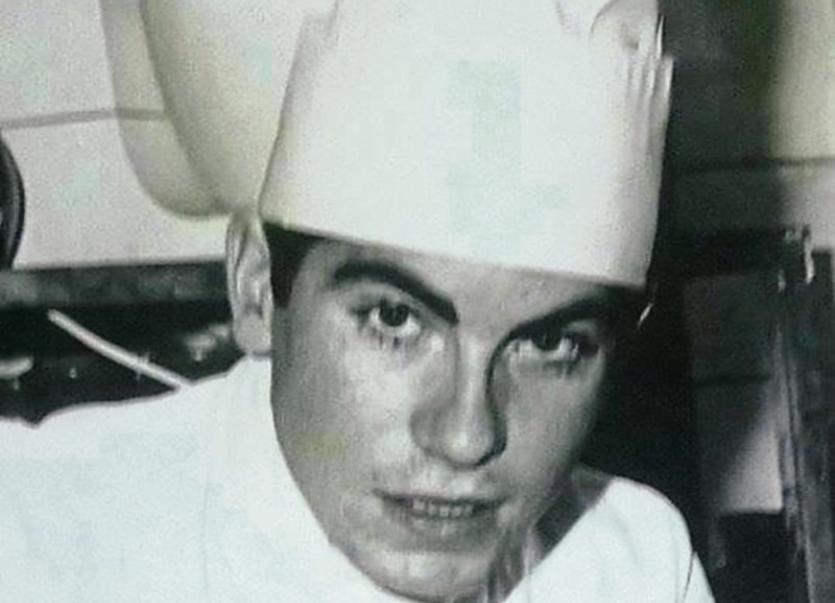 Patrick Nugent, who died aged 23, below the poster that was circulated after his death

Gardai informed Joe and Nellie Nugent that their son Patrick was dead.

The night before, Patrick Nugent, 23, went to work as a banqueting manager in Bunratty “perfectly healthy”.

But he never came home at the end of a 40th wedding anniversary party.

What happened in Bunratty that night became the focus of national debate, especially when it became known that two off-duty gardaí were caught up in the events.

A manslaughter trial and an inquest raised more questions than answers, with claims and counter claims made about who was where and who did what on the night.

Mr Nugent, of Feenagh, Sixmilebridge, was supervising a party at the Bunratty Folk Park, when he suffered fatal injuries as the premises were being cleared at around 4am.

Guests at the party recalled hearing a crash outside and rushed out to the reception area to find Mr Nugent collapsed on the ground and holding his stomach in obvious pain. There were two crashed cars in the car park outside.

Mr Nugent was heard to say “he clocked me” three times before he lost consciousness. He was later taken by ambulance to Barrington’s Hospital, where he was pronounced dead at 5.15am.

Over the days, weeks and years that followed his parents searched for answers as to how he died, and who, if anyone, was at fault. 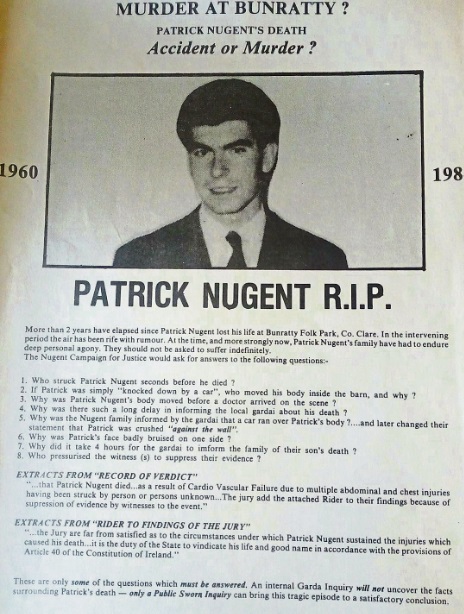 They never received the answers they sought, and following their deaths, it has now fallen to his siblings in their quest for truth.

His late parents and brothers Martin and John have long campaigned to have the cold case reopened.

A new inquiry has now been established to examine the Garda Síochána investigation into the suspicious circumstances surrounding his death in Bunratty 33 years ago, among some 320 cases in the State which will be further reviewed.

The cases are being examined by the Independent Review Mechanism, set up in May 2014, to consider allegations of Garda misconduct or inadequacies in the investigation of those allegations.

However, his family has expressed disappointment at the terms of reference of the inquiry, which will be led by retired District Court judge Patrick Clyne, as appointed by the Minister for Justice Frances Fitzgerald.

A solicitor for the family, Darragh Mackin of Belfast firm KRW Law, said they may choose not to engage with the inquiry because it has no confidence that it will be effective in finding out what happened to Mr Nugent.

It may consider seeking judicial review to challenge the terms of reference.

“In the current climate, when allegations of Garda misconduct are of extreme public importance, it is deeply regrettable that the Minister has sought to draft the terms of reference that clouds the main issue,” said Mr Mackin.

“Patrick was often described as meticulous, hard working, dedicated, talented - the list goes on. He had all these qualities, and much more,” said his family.

“To us, his family, he was Pat. Our older brother. Someone to look up to. Someone who was as happy helping out on the farm as putting on his suit and going to work.

“Someone who enjoyed going to matches, laughing and chatting with friends and family.

“Pat was a son, a brother, a grandson, a nephew and a cousin to a family who will always hold him in their hearts.”

An inquest and criminal trial never revealed who hit him or how he ended up on the ground when he was hit by a car.

A pathologist found that his injuries were consistent with being struck by a car, and that he had been in a crouching or lying position at the time.

William Ryan, a well-known and long-time chef at Shannon Airport, now deceased, was charged with Mr Nugent’s manslaughter, dangerous driving causing death and failing to keep his vehicle at the scene of an accident, but he was acquitted on all counts in May 1985.

He gave three different statements to the Garda about what happened on the night, and had pleaded not guilty to the charges before his acquittal.

On June 3, 2014, brother John Nugent wrote to the Minister for Justice, again seeking justice for his brother.

He enclosed a copy of the rider attached by the jury following the inquest into his death in October 1985, which called on the then Minister for Justice to have the matter further investigated, as they felt there “had been a suppression of evidence”.

In the letter, Mr Nugent stated he did not want a “garda-bashing exercise” but just wants “the truth, so my brother Patrick can rest in peace”.

“My parents went to their graves not knowing what really happened and still fighting for justice for their son. Justice is a right, not a privilege, a right I feel was not afforded to my family.

“Given all the information that has come to light in recent months about the gardaí, I am hoping that you will do everything in your power to see that justice prevails and that my brother’s life is vindicated,” he stated.

He outlined several questions the family had raised decades ago – and were circulated in a flyer after his death, pictured above – which still remain unanswered.

“Who struck Patrick before he died? If Patrick was simply knocked down, who moved his body and why?

“Why was there such a delay in informing local gardaí about his death? Why were the family told different reasons as to how Patrick died? Who pressurised the witnesses to suppress their evidence?”