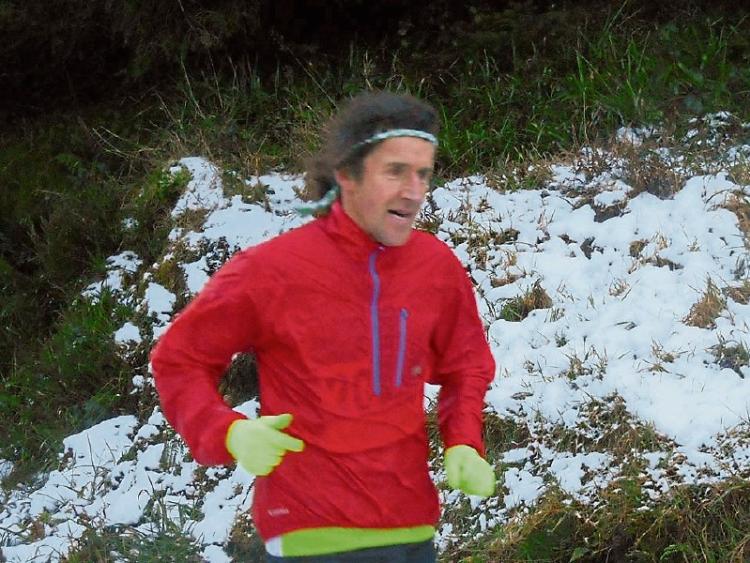 THE FUNERAL took place on Tuesday, after a long illness, of Cappamore native and running legend Michael Cunningham.

More commonly known by his nickname “Curley” due to his unique hairstyle, he stood out not only on account of his trademark headband but also for his humble and affable personality.

A bus driver and farmer by trade, he went out of his way in every walk of life to help anybody that he could. He was a member of Mooreabbey Milers AC in Tipperary and a former member of Bilboa AC in Cappamore. He won numerous county, Munster and national titles with both.

Despite having never laced up a pair of running shoes until the age of 34, Curley’s list of accolades was endless. Within a few months of taking up the sport in 1999 he ran his first marathon in Dublin in a time of three and a half hours. He would subsequently go on to compete in every Dublin marathon until 2015.

His last Dublin marathon also proved to be one of his finest as he clocked 2:46.46 for 90th position, a remarkable time for a man of 50 years of age. Despite the severity of his illness, it was only a couple of days before the 2016 race that he decided against doing his 18th consecutive Dublin marathon.

He was equally adept on the track, the roads and in cross country. However, it was in the mountains and hills where his talent truly excelled. Deceptively strong going uphill and devoid of all fear on even the most treacherous of descents, he regularly triumphed over leading runners half of his age.

He competed for Ireland on the international stage on numerous occasions, the pinnacle of which was a 10th place finish and a team bronze medal at the World Masters Mountain Running Championships in Wales in August 2015.

Within running circles Curley was fabled for his tenacious and audacious approach to racing. He would habitually set off in the front pack of a race regardless of who was present.

One particular performance which exemplified his status as one of the grittiest runners around came in local hill race in the Galtees in early 2015. Despite having taken a severe fall on the descent and rupturing his knee in the process, he still managed to dust himself off and come over the line in first place.

He would go on to spend the following four days and nights in the Regional Hospital recuperating from his injuries.

Another remarkable success came in the famous Ballycotton 10 mile race in March 2016, where despite being in the acute stages of his illness, he broke the 60 minute barrier and finished in the enviable top 100, a feat which very few men over 50 have accomplished.

He was also known for his unrivalled recovery powers. Often times he partook in two and sometimes even three or four races on any given weekend. Whereas the average runner will compete in about 20-30 races per year, Curley completed an astonishing and record breaking 121 races in 2014. Amongst these were ultramarathons, marathons and several 34 minute 10ks.

Throughout the years he would regularly be seen running fast 400m repetitions in UL track on the evening after the Dublin marathon. As many of his friends in the running community commented, he just never seemed to get tired.

In many respects it would be appropriate to sum Curley up as the jack of all trades and the master of so many.

His other passions included rearing prize-winning cattle, gardening and the maintenance of vintage cars and tractors. In each of these pursuits he won numerous awards. Moreover, for many years he hurled and played soccer for his local clubs with great distinction.

Mike was known far and wide throughout the running fraternity as he brought his infectious smile and heart-warming personality with him wherever he raced. His mild-mannered disposition and his calm and serene attitude to life made him a hero to so many people throughout the country.

To describe Curley as a gentleman would be an understatement. He was one of the few people that radiated positivity no matter where he went or who he met.

Throughout his illness he never became angry and always retained his upbeat outlook on life. In the early stages of his battle he continued to do what he loved doing best, running and when he was no longer able to put on a pair of running shoes it was evident how much he missed this primal form of activity.

It was a testament to the popularity of the man that his reposal on Monday night went on for nearly two hours after the allotted time, with running folk having travelled the length and breadth of the country to pay their last respects.

While he will be sorely missed by all of the people who he touched down the years, he will also be fondly remembered for all of joy and happiness which he brought to so many.

He may be no longer with us on this earth but the legend of “Curley” will live on.

“His life was one of kindly deeds, A helping hand for other’s needs”