Devane was 'more of a brotherly friend to me than a solicitor': Kelly 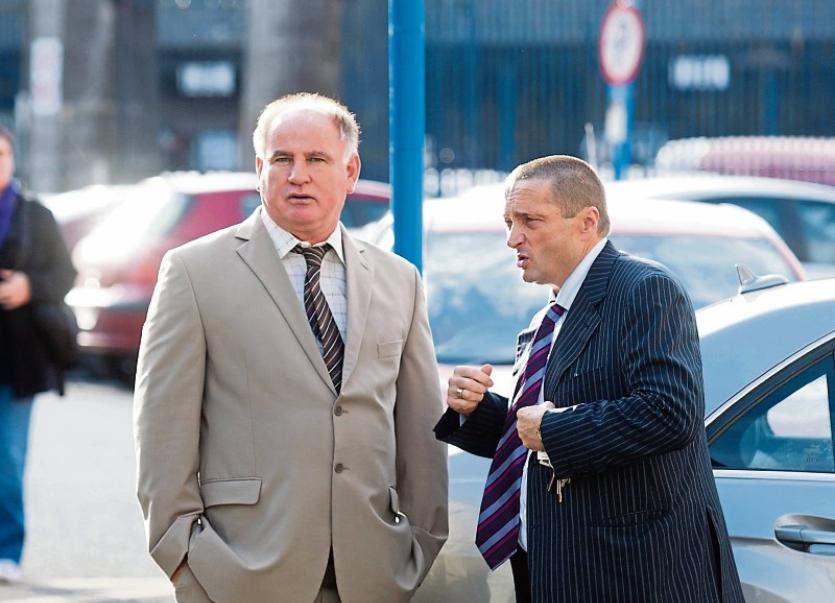 Anthony Kelly with his solicitor, the late John Devane

WELL-KNOWN convicted Limerick criminal Anthony Kelly, who has survived up to 12 assassination attempts on his life, is to lead tributes to the late solicitor John Devane at his funeral Mass this Thursday.

Kelly, 56, of O’Malley Park, Southill, was acquitted of killing Limerick brothers Thomas and Sammy McCarthy in a row at a pub at Thomondgate in 1982.

In 2011, a jury again found Kelly not guilty of possession of a semi-automatic pistol with intent to endanger life, arising from a shooting incident in Southill in 2009.

“Me and John were very close. He was more of a brotherly friend to me than a solicitor. We go back an awful long way. He represented me in an awful lot of cases and to the best of my recollection he never lost a case.

“He represented me for 23 years and he always represented the deprived and under-privileged in Limerick,” Kelly told the Limerick Leader this Wednesday ahead of the funeral mass.

He is due to pay tribute to Mr Devane, 54, who represented some of Limerick's most notorious criminals during his 20-year career, at his funeral mass in Parteen this Thursday.

Among this other clients were John Dundon, who was convicted of the murder of the innocent Garryowen rugby player Shane Geoghegan, 28, who was shot dead in a case of mistaken identity in Limerick on November 9, 2008.

He also represented Vincent Collopy, of St Mary’s Park, following his extradition from Bulgaria to face a charge of threatening to kill a State witness, who later assisted him in court in a wheelchair as Mr Devane's health declined.

“I used to have very good fun with John,” continued Kelly. “We went on holidays together to Spain with our families, and he'd often come over to my house for dinner.

“When his health was bad, he didn't want to be a burden to anyone. He was never a burden to us. He will never be forgotten by me or my family. It was unfortunate the health battles he had to face, but he fought them with dogged determination, and he did come back to court,” he said.

Kelly’s convictions date back date to when he was 16, when he received an eight-year sentence for hijacking a taxi, and served time in Limerick Prison, St Patrick's, Arbour Hill and Mountjoy prison. He, however, claimed he was “innocent”.

The father of six, whose son Tony is currently serving a prison sentence, said Mr Devane was “a solicitor unlike any other.”

“He often represented people for free, or gave his clients a few bob going home if they didn't have any money. He'd look after people; he was very generous.”

Kelly has survived a number of assassination attempts on his life, estimating up to a dozen attempts, including one incident when he was shot five times from a semi-automatic handgun. He made a full recovery.

His brother, the late Limerick city councillor Michael Kelly was also investigated by gardaí for alleged interference with the course of justice, but no prosecution arose.

Michael Kelly died in June 2004, four weeks after he was found with a gunshot wound to the head at his mother’s home.

Despite claims by Anthony Kelly and other family members that he was murdered, gardaí ruled out any foul play in his death. Anthony Kelly even had his brother’s coffin and remains exhumed to prove that no gun had been buried with his brother.

He has other convictions for public order offences, including possession of illegal tobacco and operating a shebeen from his home, which he described as “a great spot.”

He was convicted at Limerick District Court in 2009 of occupying an unlicensed premises contrary to the Intoxicating Liquor Act of 1962. He received a fine of €63.49 - the maximum penalty available – from the then District Court Judge, Tom O'Donnell. Son Tony Kelly was sentenced in July 2016 to five and half years in prison for his role in a in a seven-hour crime spree across large parts of county Limerick in May 27, 2015.

He has numerous previous convictions for assault, theft, robbery, criminal damage, burglary, and possession of drugs.