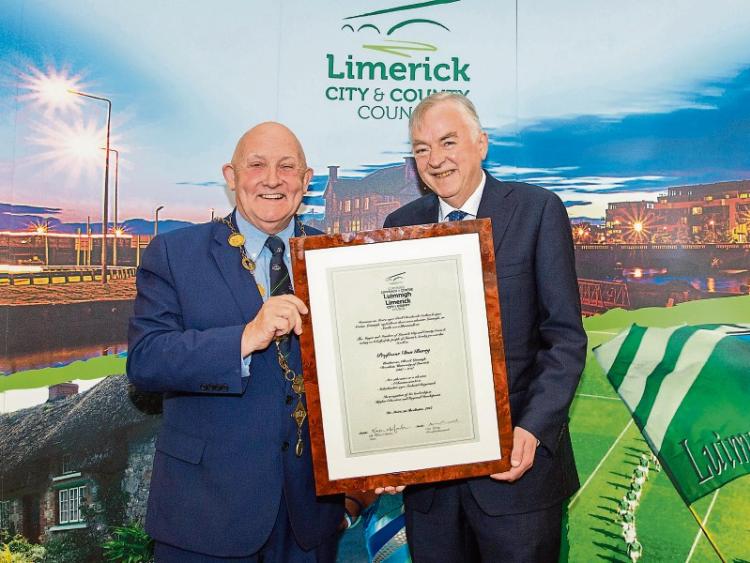 OVER 20 years ago Don Barry pulled into a garage in Limerick while en route to his first job interview in the University of Limerick.

“I suppose you’re here for the big match?” asked the man at the petrol pumps.

But Barry conceded he “hadn’t a clue what he was talking about.”

The man who bid him on his way wasn’t all too taken with a Corkman not knowing that Cork Con were due to play a major rugby match against Garryowen that day. Those impressions aside, Yale educated professor Barry got the job.

He went on to become the first holder of the Chair in Statistics at UL in 1997 and was director of the college’s Statistical Consulting Unit. He served as Vice president Academic and Registrar prior to being appointed president in May 2007.

This week, he was honoured to receive a civic reception in County Hall after stepping down from his ten-year post, and leading the university through a time of major change.

Described as “a quiet man but one of steel and determination”, by chief executive of Limerick City and County Council Conn Murray, professor Barry has weathered a few storms with an unflappable nature.

History has yet to judge his involvement and leadership in the case of numerous whistleblowers who have spoken out about financial practices, and many others in different departments who received six-figure sums to leave UL, and predominantly against their will.

Then a “lavish” €2m residence built for him on campus at a time of economic austerity – and albeit with private funds – provoked a flurry of headlines.

Controversies aside, the former president said the reception, which was attended by his wife Anna, his parents, and wider family, was a “very special moment.

“I am a Cork man by birth, but I feel as if I have become a Limerickman by persuasion and that makes this honour even sweeter. It means an awful lot to me.”

In the intervening decade he has presided over many landmark developments on campus including the establishment of the graduate entry Medical School, the Kemmy Business School, the Tierney Building, the expansion of the north campus, the development of UL Sports Arena and the Bernal Institute.

In no time, he saw that rugby in upper-class Cork circles pervaded every section of life in Limerick. “I soon learned that Limerick is completely different; that everybody in Limerick is rugby mad.

His “proudest day” in office was the signing of the contracts for UL to become the home of Munster Rugby, as Limerick is “the heart and soul of rugby”.

“As I got to know Limerick better, I was very struck by the people of Limerick and their great pride in Limerick. Everywhere I went I found a practical, can-do approach to life, where no nonsense would be tolerated.”

He accepted this honour on behalf of his colleagues in UL, and others who realised a “shared dream in a vision for UL, for Limerick and the Mid-West region...It is your university.”

Cllr John Sheahan said: “Limerick is going to become Ireland’s second city very soon, and you, as a Cork man, will have helped that.”

Tributes were paid to his leadership of UL by the Mayor of Limerick, Cllr Kieran O’Hanlon, the chief executive of Limerick City and County Council Conn Murray, and other members of the council, in a ceremony attended by the Bishop of Limerick, Dr Brendan Leahy, and the Chief Superintendent of the Limerick garda division, David Sheahan.

Mayor O’Hanlon said professor Barry deserved to “be proud of his legacy in leading one of the jewels of the crown in Limerick and the Mid-West region.”

Mr Murray said that anywhere council officials travel they are “proud to put the badge of UL forward”.

A framed scroll was presented to Professor Barry to mark the civic reception in his honour, and in recognising his leadership in higher education and regional development.