Limerick market patrons set to cosy up to 'Willie O'Tea'

Politician has been immortalised in wool by one local knitter 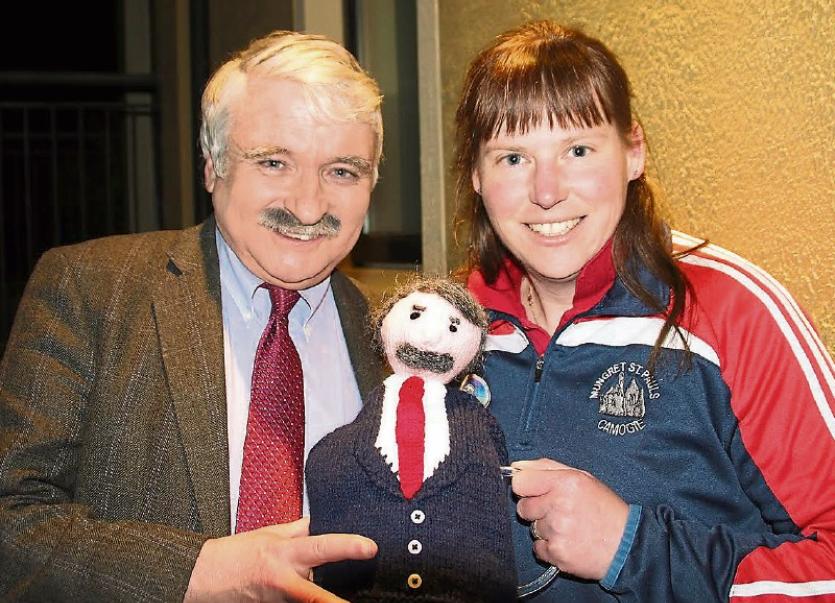 WILLIE O’Dea has held many prestigious titles down through the years, but now he can add ‘tea cosy’ to that list.

The politician has been immortalised in wool by one local knitter, and even got the chance to meet his knitted counterpart – Willie O’Tea – ahead of its sale at Mungret Artisan Market in April.

“I’ve always done knitting, I got it from my mother. I started doing tea cosies for the first craft fair that we had last year just after the Mungret Music Festival,” said knitter Wanda Dwane.

“I’ve just been doing them for around a year. I do wine cosies as well.”

The renewed popularity of tea cosies is evident by the hugely popular ‘Michael Tea Higgins’, which can be seen in homes across the country.

Wanda also makes her own version of Michael Tea, as well as a host of other characters.

“The Michael ‘Tea’ Higgins ones have really gotten popular, and I do minions ones as well. I do loads of different character ones. I have done a little cottage as well, but the Michael D Higgins one is probably the most popular,” said Wanda.

“I do the knitting while the kids are training, they are all involved in the GAA club, so while they’re gone training for the hour I’m sitting down knitting,” said the mum-of-three.

With a 16-year-old, an eight-year-old and a seven-year-old, Wanda is kept busy as a GAA parent.

“The Michael D and Willie O’Dea cost €20, because there’s a little more time involved in them. They take about two days, when I think about the training times, and there’s a lot of training that goes on in my house!” she added.

“A lot of people would crochet them, but I hand knit. I don’t have the patience for crochet. If you put crochet down, you lose track of where you are, but at least with knitting you can keep track of it,” she said of her technique.

Willie O’Tea’s hair and moustache are particularly textured, and it’s all down to a wool she was gifted by her sister.

“My sister gave me a bag of wool she had, I was delighted because I tried to buy wool like that and I couldn’t find it,” she said.

Of course, knitting is hailed as being massively therapeutic, and Wanda agrees.

“I only have the time to knit the tea cosies. I constantly have orders.

“I also do jerseys in different colours, county colour jumpers, and one friend of mine has ordered 20 at this stage. All her family get them, but I have yet to see one on a teapot, they always go on people’s heads when there’s a match on!”

Like many people, Wanda was taught how to knit in primary school, “and I remember my nana used to teach me... but it was my mother who really taught us,” she said.

Wanda will also be selling a number of other tea cosies at the market at Mungret St Paul’s GAA Club, on Sunday, April 9 from 12pm to 3pm.