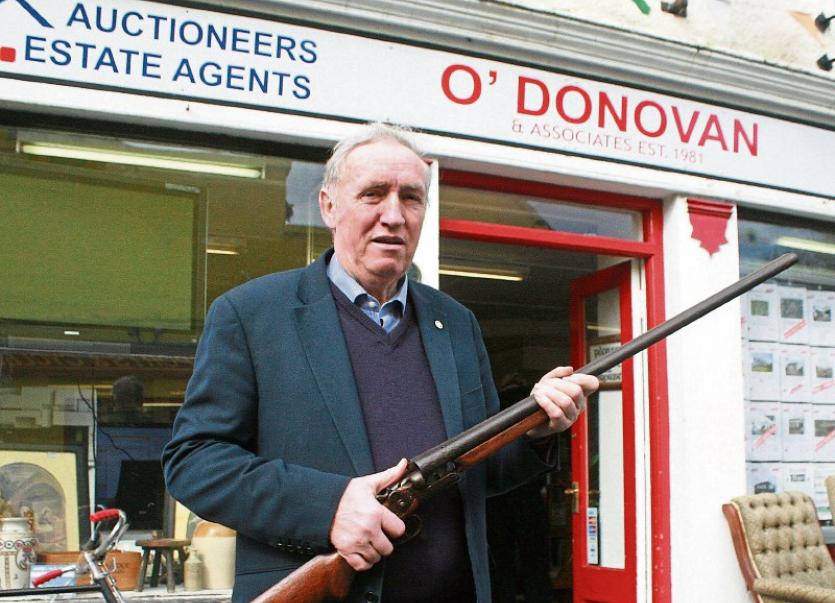 A VALUABLE shotgun which was stolen from a west Limerick auctioneer’s office has been returned to its owner by gardaí.

The 150-year-old double barrel gun was taken a number of weeks ago after the culprit threw a brick through the window of O’Donovan and Associates in Newcastle West.

The weapon has an estimated value of between €600 and €800, and was destined to go up for sale at the auction rooms from which it was stolen.

“We are glad to have the gun back, the gardai worked quickly to recover it,” said Pat O’Donovan.

It is believed that the weapon was recovered in the Newcastle West area.

Dating from the 1860s, it was likely to have been used in the Fenian conflict of the same decade.

The shotgun had been bought at a car boot sale, before it was discovered to be a valuable artefact and ended up in the antiques circuit.

“I arrived there first, we got a phone call and I arrived over there on the morning.”

The gun is not in working order, but gardai were concerned it could be used as a means to intimidate.

“It is not working. It is in perfect-looking order, but the shooting parts had all been removed,” said Mr O’Donovan.

Auctioneers are entitled to sell antique firearms when their function is ornamental, as they are exempt from the normal rules under the Firearms Act.

When the gun was stolen, hopes that it could have been used in some of the commemorative Fenian reenactments around the county were dashed.