Ardagh set Fayre as it gears up to mark Fenian Rising 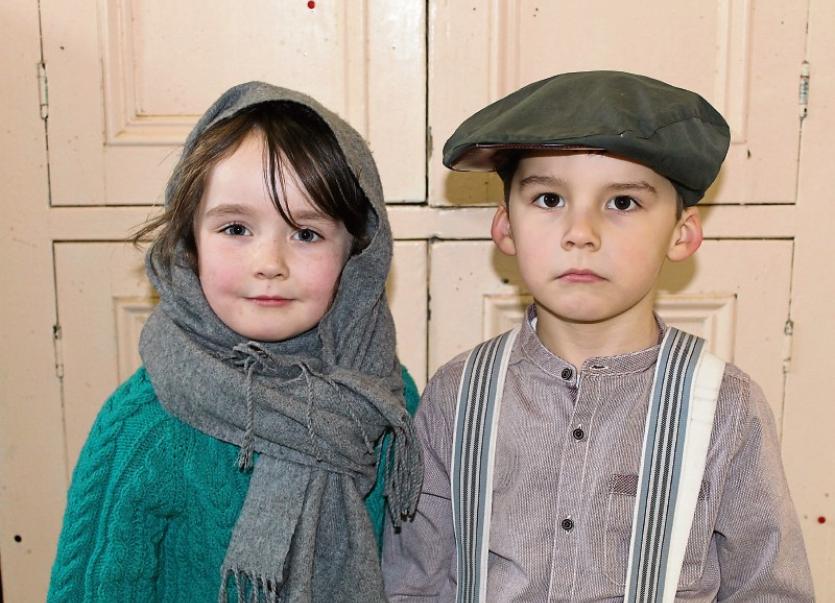 Ella Hough and Michael Meskell, pupils at Coolcappa NS, all decked out to play their part in the Fenian Rising

ARDAGH is all set to commemorate the 150th anniversary of the Fenian Rising with a lively programme of events this Saturday and Sunday.

The weekend will kick off with a Rambling House session on Saturday evening in the local hall, starting at 7.30pm. But hundreds of participants and spectators are expected in the village from mid-day on Sunday when a group of re-enactors begins the two-mile march which preceded the attack on the police barracks in Ardagh on March 5, 1867.

The re-enactors will be armed with pikes and muskets and will be dressed in period costume. But, according to  John O’Sullivan, chairman of St Kieran’s Heritage Society which is co-ordinating the event, everybody is welcome to don 19th century attire and walk the route. In fact, the society is actively encouraging it.

Back in the village at 1pm, there will be an unveiling of a commemorative plaque and a retelling of the story of the uprising.

This will be followed at 2pm by The Village Fayre, an old-style afternoon of entertainment with craft and food stalls, music, singing, cross-roads dancing, churn racing and pony and trap rides.

In addition, there will be a tug-of-war as well as old-fashioned children’s games such as pitch and toss, a spud and spoon race and marbles.

A pamphlet outlining the historic events in Ardagh in 1867 will be on sale on the day for €5.

But the remembrance of all things Fenian begins this Thursday night with a display of historical artefacts connected with the unsuccessful uprising. A musket used in the rebellion, a copy of the Fenian Proclamation of 1867 and replica Fenian Flags will be on display in the Desmond Hall Castle in Newcastle West from 7pm.

The exhibition has been put together by Heritage Services section of the OPW and historian and Desmond Hall curator, Dr Pádaig Óg Ó Ruairc will amplify the exhibition by giving a brief talk outlining and legacy of the Fenian movement.

He will be followed by local historian and author Tom Toomey who will give an overview of the rebellion in Co Limerick, where attacks were made on police barracks in Ardagh and in Kilmallock.

Next Monday night will also see a commemoration of Fenian poet Michael Scanlan. Born in Castlemahon, in 1833, he emigrated with his family to the US in 1847 where he secured a a post in the government service. The author of poems such as The Bold Fenian Men and The Jackets Green, he was active in the Fenian movement in the States but died on March 6, 1917.

On Monday, a commemorative plaque will be unveiled on Knockfierna Hill at 5.30pm and at 8pm, in Castlemahon Community Hall, historian Liam Irwin will speak on Scanlan’s life.