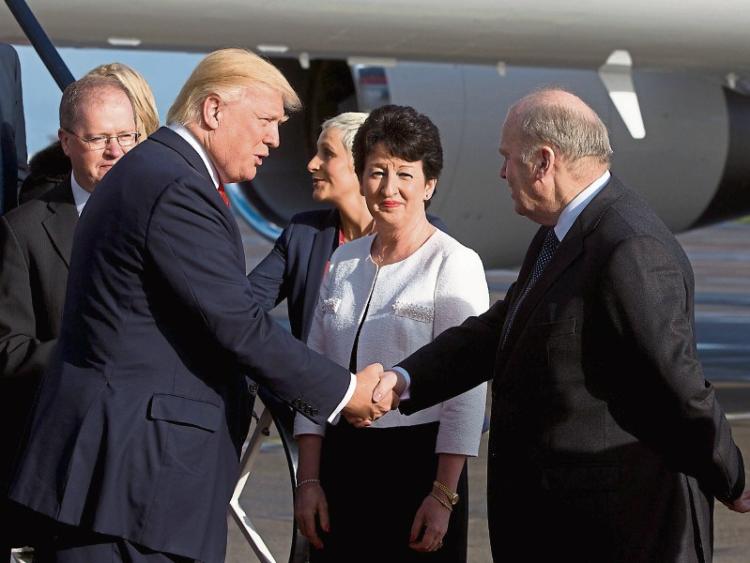 THE MINISTER for Finance Michael Noonan has urged that the Taoiseach must get the ‘timing right’ if any invitation is extended to US President Donald Trump to visit Ireland.

A number of Government ministers are at odds over whether any invite should be extended, following earlier petitions over the Taoiseach’s visit to the White House for St Patrick’s day.

“I think he should invite him at some stage,” Minister Noonan told the Limerick Leader, “but I think an early visit might be controversial.”

“In all these things, the only reason he would invite him would be for the economic benefit of the country, and if it was too controversial it probably wouldn't be of economic benefit. So it's a matter of timing, but he certainly shouldn't rule it out,” he said.

Asked if any invitation to Ireland should be extended during the Taoiseach's expected visit to the White House on St Patrick's day, Minister Noonan said: “I haven't discussed it with the Taoiseach, and it's a matter for the Taoiseach.”

Last week, Mr Noonan also supported Enda Kenny’s upcoming visit to Washington, saying: “State visits aren’t always organised on the basis of friendships, and the Taoiseach will go and have a private conversation with him and give the Irish view on things. He’ll be highlighting his concerns around a range of issues and he’ll have a full discussion as he always does when he visit foreign leaders.”

Mr Noonan was previously criticised for being part of a welcome party for Mr Trump when the US billionaire visited county Clare in 2014, arriving in his private jet at Shannon Airport to visit his golf resort in Doonbeg.

A harpist, singer and violinist joined local dignitaries to greet Mr Trump on a red carpet at Shannon at the time.

Mr Noonan dismissed criticism then, saying: “Would there be criticism if it was an IDA factory that was going into West Clare with 300 jobs? This man says he’s going to spend at least double the purchase price for investment down there.”

The Doonbeg golf resort was purchased for some €15m, and the US president has now stepped down from its board, Tigl Ireland Enterprise, as well as his daughter Ivanka, company accounts show.

Its other directors include Donald Trump Jnr and Eric Trump.