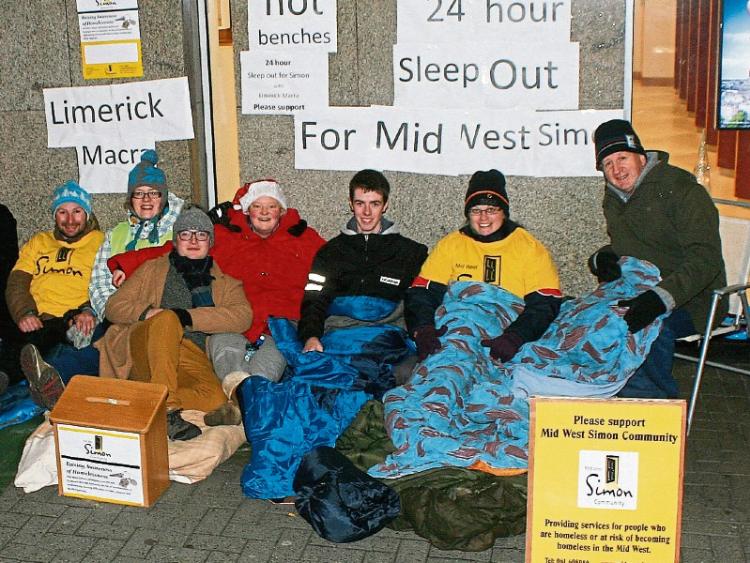 O'CONNELL Street – a ceaseless cold fills the city’s main thoroughfare, through a dense fog that dampens everything in its path.

This cloud illuminates with the stream of Christmas decor, vehicle and traffic lights, all flickering, one block after another. And all things appear ambiguous until they are much closer; crowds leaving restaurants; youths in Santa jumpers linked together after their umpteenth pub; low humming of Christmas tunes; and all signs of joyous festivities.

Yet, on the same street where jubilations are at a high, the Christmas spirit for some has been shrouded by one of the worst homelessness scourges the city has ever faced.

On Saturday night, this reporter saw the scourge in the flesh. I was stationed at the AIB bank, observing the benevolent work of Limerick Macra na Feirme’s sleep-out, whose 14 volunteers raised an astonishing €8,518 for Mid-West Simon Community. Members of Patrickswell GAA club did a sleep-out on Friday night, in aid of Novas Initiatives, raising €4,624.

Later that night, I roam the various streets and small alleyways, and witness a great darkness. In a city that has been making headlines for success stories of jobs announcements and multi-million euro investments, I witness a world overwhelmed by desperation, deprivation, fear and hunger – a world destitute of hope.

Macra member, Emily Sexton tells me that there was “tremendous goodwill” from the public on Saturday afternoon, with a large number of local businesses donating food, and more than 50 people offering her tea.

As she recounts the list of positive experiences, a woman walks across the road to give Emily hot food, to donate to a homeless person. Before leaving, she gives Emily a warm hug.

“You see what I mean?” she turns to me, “This is incredible.” No more than a minute passes before three women – in their late teens – on their ‘12 pubs’ excursion, generously drop a few coins into the bucket. “Every penny counts, doesn’t it?” one chirps.

Ray McMahon, Limerick city, sits next to me, detailing the extreme poverty he observed during numerous trips to the Philippines. And even though the scale of poverty is “much different” here, poverty is obvious with the homelessness situation, he says.

As reported previously in the Leader, at any given time, there could be up to 30 vulnerable people sleeping rough. If they are not sleeping under outdoor shelters or in cardboard boxes in secluded spots, they are squatting in derelict and unoccupied buildings, or in apartment block hallways.

At 8pm, there were three individuals on O’Connell Street, one on Bedford Row, and another on Liddy Street. At 10pm, they were gone, with another contingent peripatetically roaming about the city’s social quarter; Denmark Street, Ellen Street, Chapel Street, and Cornmarket.

Near Ellen Street, I sit next to a man whose English is minimal. He asks me if I speak Italian or Spanish, but I know neither, so I whip out my phone to access a translator online. He prefers Italian, so I type: “How long have you been homeless for?”

He explains, in simple English, that he arrived in Ireland two months ago, and has failed to find work, forcing him – for now – to beg on the streets. His cup, I can see, has no more than a fiver. The man, in his 30s, says: “I am very upset right now.”

In a sudden jerk, he lifts himself up and beckons me to escort him to a taxi rank. As we trek passed Todd’s Bow and through Cruises Street, I ask why he is in a rush, to which he responds with punching gestures.

“People – they want to hurt me.” He couldn’t, in his hurried state, elaborate on that.

After our farewells, I head back to the social quarter, where congregations of party-goers are still pouring onto the street in a claustrophobic deluge, zig-zagging from bar to bar.

The air is freezing, and all exposed skin is growing numb.

A lengthy queue to a pub forms along Denmark Street, and as it marches on, I just about see a man in the background, resting in an archway with a small terrier pup. I notice his hands blueing as the mercury drops. He is shivering, but he is keeping his white-coated pet warm with a blanket. And while he tells me that he hasn’t had a bite to eat in a couple of hours, there are two empty dog food cans, with one yet to be opened for his furry friend.

I ask him if he wants anything from the cafe, and in a gauche manner, he asks for a tea; four sugars and a drop of milk. He is superfluously grateful.

But it’s just €2, and here I am worrying about balancing the books with bills and pints. He sees tea as a luxury. Returning to the sleep-out group, there are more harrowing sights of men in thin sleeping bags, on cardboard boxes, under the Eason and Brown Thomas doorways. Further down, a man sleeps rough, showing a bloodied face. In the space of one hour, I see this.

A spokesperson for Novas Initiatives has said that, already, the winter homeless levels are “unprecedented”. It is, indeed, startling. Of our small population, 47 children are in emergency accommodation. And according to the latest reports, there are 19 children and 119 adults staying in temporary accommodation.

And in response to last winter’s lengthy waiting lists for accommodation, Novas and Limerick City and County Council’s homeless action team have set up a winter initiative night time hostel, which will operate until March. On its first night, on Monday, the 15-bed facility accommodated 13 people.

New statistics this week show that there are 41 council-owned houses lying idle as we speak.

Volunteering for the sleep-out, Sarah O’Riordan says that she is sad to see people as if “someone is just turfed out onto the street like a forgotten member of society”.

And these members of society form just a small part of Limerick’s chronic levels of deprivation. According to the recent Regeneration report, launched by Minister for Housing Simon Coveney, there are six electoral divisions in Limerick – all neighbouring Regeneration areas – that are showing severe signs of deprivation. St Mary’s Park is seen as the “most disadvantaged area in the country”.

And as the Government comes under fire for its inability to eradicate homeless numbers in recent weeks, charities and the concerned public are intervening before Christmas.

Geraldine Clancy, who is responsible for fundraising activities for Mid-West Simon Community, details recent activities that exemplify the goodwill of the locals. Last week, 47 pupils at Gerald Griffin national school, Loughill, filled a van with food for the homeless. The Askeaton/Ballysteen youth club gathered “anything and everything” for gift packs for males and females with some “going all out, giving them something extra nice”.

“But one of the most significant things to happen this week was when a woman walked into the charity shop [on Roches Street] to donate €1,500 that she had just won on a scratch card. I just went to her and said: ‘Can I give you a hug, thank you so much.’ And she just started to cry. It was so heartwarming. Some people just really get it.”

Ian Culhane, housing worker, says that it is endeavouring to house as many families as they can before Christmas. By Tuesday afternoon, MWSC has given three individuals keys to a new home, with another two in the pipeline “so that they can enjoy a family Christmas”. Commending the communal effort, manager Jackie Bonfield says: “Without community organisations and the general public, we would not be in a position to provide the work that we do.”

At 1am, a friend buzzes me on my phone. I take it from my jacket, which is covering another three warm layers. He asks me if I want to head into the city for a few socials, or to relax in front of a fire, get a takeaway and watch a film or two, in my home. And instead of thinking about all these luxuries I take for granted, I ponder about the man who can barely afford a tea, and the words of a wise Macra volunteer:

“It’s our responsibility to ensure that this does not happen to anyone ever again.”