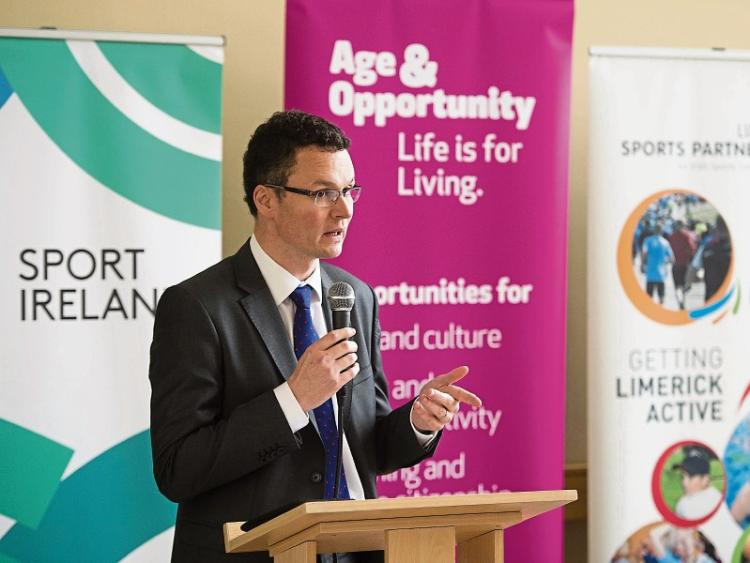 “THIS is my opening salvo,” Limerick TD and Minister of State for Tourism and Sport, Patrick O’Donovan declared after creating headlines over his proposals to ensure greater gender equality in sport.

But he is deeply satisfied that his proposals have opened up a “national conversation” on the role of women in our governing sports bodies.

“If I went out and launched a consultation document it might have made page nine but nobody would be talking about it,” he told the Limerick Leader this week.

“I have focused minds on the role of women in sport. If I went the scenic route, this would not have happened.”

His proposals about gender quotas, he emphasised, would affect only the governing bodies of sports receiving state funding.

By 2019, the big sporting bodies must have a minimum 30% women, 30% men and 40% either women or men on their national committees. Smaller organisations will have until 2020 to achieve this. But all bodies could face unspecified penalties if they fail to take those measures.

“Some people have taken it up all wrong. It is only one committee in each sport,” he pointed out.

“I am not going after anyone,” he stressed.

“I am not going to be confiscating fields or going after people like a Grinch after Christmas.

“What I have done here is I put out a proposal in relation to women’s role in. Those proposals are now gone out.

"I have asked Sports Ireland to write to all the organisations and see what their views are and they have until the start of February to say how it affects them, what difficulties they see for their organisation and how they are going to empower women,” Minister O’Donovan continued.

If organisations come up with a different way of achieving greater gender equality, he is, he said, very open to hearing those suggestions.

“There may be other effective ways of doing it.”

But he is adamant the time has come to take on the issue  and to ensure that young women, and young girls in particular who have a high drop-out rate in sports, should have positive role models “both on and off the field”.

“I am not a fan of gender quotas,” the Minister continued. “I am not in favour of tokenism. I believe in meritocracy. We are in a meritocracy at the moment but we still don’t have women represented at the level we should in 2016.”

But he pointed to the introduction of gender quotas in politics which had been difficult for the political parties had resulted in the greatest ever number of women TDs in the Dail.

He also indicated he might be open to a slightly longer time-frame than 2019 and 2020.

“I knew this was going to prove contentious,” he added. But he stressed: “I am not going after any organisation. I am not imposing some kind of Neanderthal view on anyone.”

However, he continued, while he was happy that a national conversation on gender equality had been sparked, he pointed out that his proposals also include looking at access for people with disability and for the non-national communities.

He wants, he said, to make sport more inclusive.