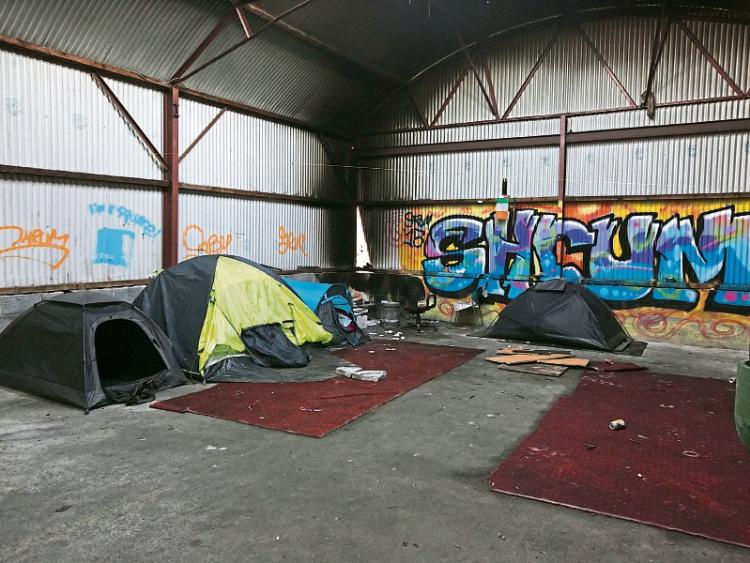 The homeless camp, set up in a derelict warehouse on the outskirts of Limerick city Picture: Brian Gavin

A SENIOR official with the Novas Initiatives homeless charity believes there may be more than one homeless campsite in Limerick city.

Dr Una Burns, the national communications spokesperson for Novas, was speaking after pictures emerged for the first time of a refugee-style settlement, which sees up to 16 rough sleepers bed down there nightly.

The makeshift camp has been set up at an abandoned warehouse on the edge of the city, with no light and heat.

Dr Burns said: “We are absolutely appalled by this. It is intolerable that people are living in such squalor in 2016 in Ireland. We would urge more needs to be done immediately. We are advocating more beds to be put in place immediately, and will be working very closely with the Limerick Homeless Action Team to make this happen as soon as possible.”

She said there could be any number of camps like this in Limerick City, adding: “I think we all know this is not a true reflection of the extent of what is happening. It is horrific.”

Revealing the presence of the camp in a local authority meeting last week, Cllr Sean Lynch said he believed settlements like this are mainly populated by people refusing emergency accommodation.

But Dr Burns said in her experience, it is only a minority of people who would choose to sleep on the street – or in a settlement like this.

Most people want access to emergency accommodation and the therapeutic supports which go along with this, including enhanced health and well-being. There are a small number who would rather be on the streets, and we need to link with them through the street outreach to gain trust with them and support them to access mainstream services,” she said.