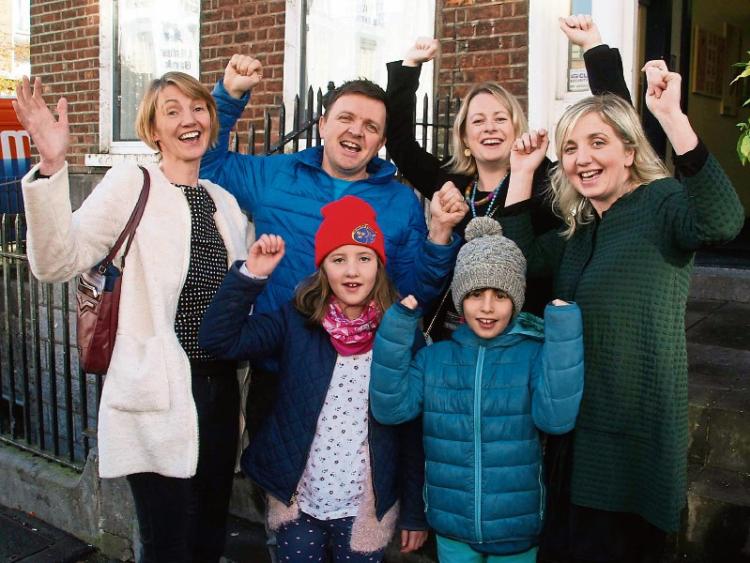 Celebration time!: Members of the campaign for an Educate Together secondary school

HISTORY is to be made in Limerick, with the first ever Educate Together secondary school opening in Monaleen or Castletroy.

It comes after Education Minister Richard Bruton revealed who would be running the city’s two new secondary schools, with the Limerick-Clare Education and Training Board (ETB) running the other 600-student facility in Mungret.

This school will open next September to first years, with the facility in Monaleen/Castletroy to follow 12 months later, initially in temporary accommodation.

Educate Together schools are unique in that children are accepted regardless of religious belief. Decisions are sought democratically with the views of teachers, students and parents all carrying an equal weight.

Maria O’Dwyer, who co-chaired the campaign for an Educate Together school in Limerick, said: “The Irish education system has been about putting square pegs in round holes, but we are trying something different. I think we have always said it is about choice. This gives parents a choice. There has been a lot of misconception about what Educate Together actually is.

Educate Together sought the patronage of both schools, and it was thought by many that due to the fact one of the two primary schools it runs is in Mungret, it would be here they would win the stewardship of the new secondary.

However, Anne Cronin said: “There was massive parental demand for an Educate Together school in Castletroy. I think ultimately it came down to numbers. We had more expressions of interest than the other patrons in Castletroy.”

Fine Gael councillor Daniel Butler, who sits on the board of governors at Mungret National School, is delighted the ETB is to run the new school in that area.

He said: “I think a clear majority, especially within the Raheen/Dooradoyle area were supportive of the ETB getting the patronage given their vast experience locally.”