Broadford project is Limerick Leader representative in Get Involved 2016/2017 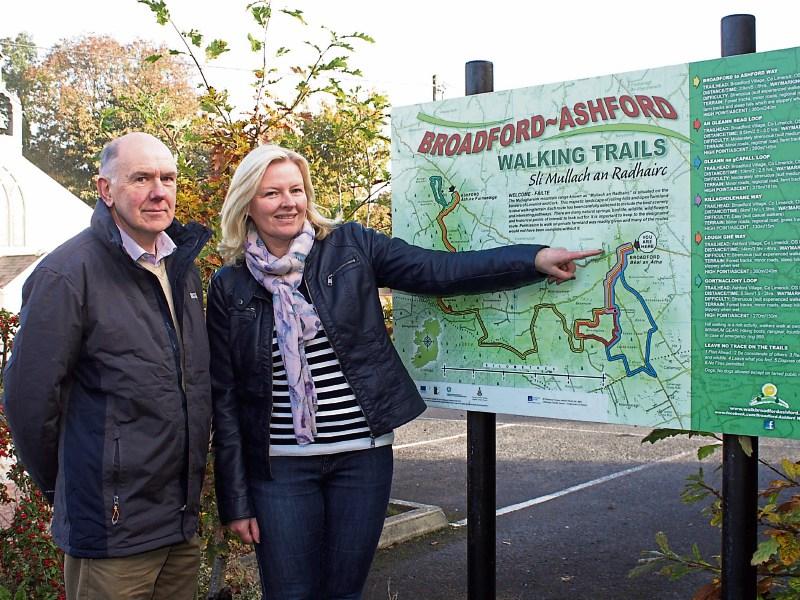 Sean Neelan and Julie O’Sullivan of the Broadford/Ashford trail group, selected as the Leader’s entry into Get Involved

A COMMUNITY project which has re-established routes along some of the most scenic parts of West Limerick has been selected as the Limerick Leader’s entry in the national Get Involved contest.

The Broadford/Ashford walking trails group was founded in 2014 and has upgraded six nationally recognised trails within the Mullaghareirk mountain range around the village.

The routes vary in distance between 6km and 20km, and have been carefully selected to provide spectacular views over Co Limerick, with all routes fully waymarked, with illustrated storyboards.

Since a voluntary committee was set up to develop and promote the routes, visitors have increased to the village, which one member Julie O’Sullivan said is overlooked.

“Broadford and Newcastle West are not that far apart. But people touring Newcastle West might not realise Broadford is there, but there is such a fantastic amenity here. It is unfortunate it is off the radar a bit,” Julie says.

“We want to bring more people back to the Broadford/Ashford area. Broadford has always been associated with community work anyway, and community projects. We have the backing of the local community and public in general. We are bringing more people into the village which helps local accommodation providers and shops,” she added.

”You cannot just expect people to go walking unless you give them the proper product. There is variety in the trails. They can be quite challenging. But in addition, we have the storyboards which show young people all the wildlife they can watch out for, as well as the historical aspect,” he explained.

Get Involved is an initiative developed by Local Ireland, formerly the Regional Newspapers and Printers Association of Ireland.

Designed to promote voluntary and sustainable projects, it is sponsored by the Sustainable Energy Authority of Ireland.

The winning project – drawn from counties across Ireland – will be awarded a bursary of €5,000, while two further bursaries of €1,000 each will be presented to the two runners-up.

Two years in development, the routes include the Gleann Beag Loop, the Broadford to Ashford way, the Gortnaclohy Loop, and the Ashford to Lough Ghe way, with the routes backed by the National Trails Authority.

“There are fantastic views on these trails of West Limerick back towards the Shannon. If you take one of our Ashford walks, there is one particular area where you can – on a clear day – see out to Loop Head,” Julie said.

Support from the local community has been key, Sean adds, with local farmers allowing right of way through their lands.