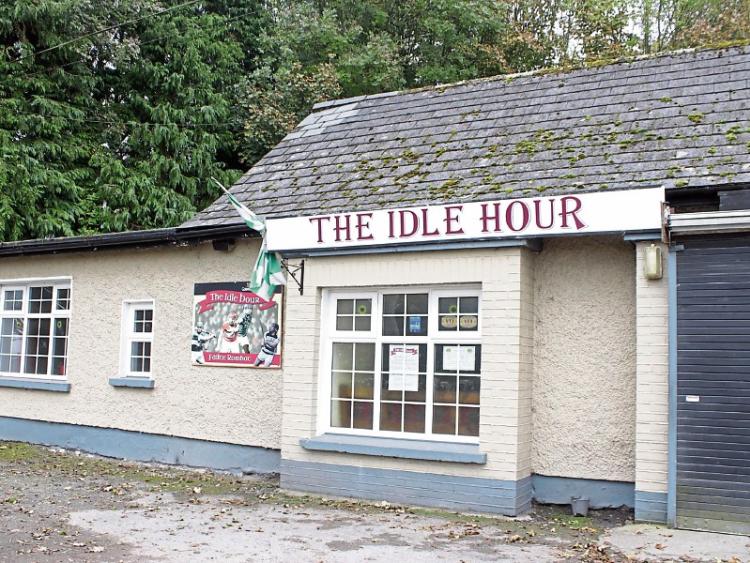 The Idle Hour pub in Effin refused to serve the family

A COUNTY Limerick publican accepted a staff member discriminated against a man and his two elderly parents who don’t drink.

Denis Linehan, solicitor for the applicants, asked Cornelius Hegarty Jnr what occurred on the evening of September 1, 2015.

“I was travelling to a public house in Effin with my mother and father. I hadn’t been there for years. I was home in the country for a few days. My parents are old so I helped them sit down. There was only one other person in the bar. He was making a roll-up and disappeared. I asked the lady behind the bar for two bottles of lemonade. She disappeared, I was waiting for 10 minutes. When she came back she said there was a ‘private function in the pub’.

“I told my mum and dad that the lady is refusing to serve us and my mum said we better go home,” said Mr Hegarty Jnr, who runs a riding school in England. His parents live in Effin.

Mr Linehan asked the 57-year-old why he thought she didn’t want to serve him.

Asked how he felt after “service was refused”, Mr Hegarty Jnr said: “I nearly went down through the ground. My mother and father don’t bother with pubs.”

Brendan Gill, solicitor for Mr Kenny, said Mr Hegarty was given a reason.

“She did say there was a private function,” said Mr Gill.

Mr Hegarty agreed she did but “there was nobody else in the premises at that time”.

The next witness was 78-year-old Bridget Hegarty. She said she “nearly got a heart attack” after her son told her what happened.

Cornelius Hegarty Snr, aged 79,  was asked how he felt? “How do you think I felt? I was never inside in that pub in my life,” said Mr Hegarty Snr.

Mr Linehan said his three clients felt embarrassed as “any normal human being would” and a private function was a “fanciful reason” to explain discrimination.

Mr Gill said Mr Kenny only purchased the premises two months previously and it was “essentially a misunderstanding”.

Mr Kenny said he wasn’t present on the night in question as he was working.

“It was the launch of Effin GAA’s lottery draw. My instructions [to the person working in the bar] were to serve the people at the function,” said Mr Kenny, who accepted the sign was not on the front door. “It is the first time I’ve run a pub. I apologise if any embarrassment was caused,” said Mr Kenny.

Mr Linehan said his clients are here to “hear the apology and I’m sure they graciously accept it”.

“Their feelings have been hurt and they are entitled to some redress,” said Mr Linehan, who added that in a similar case at a recent tribunal a Chinese Restaurant was ordered to pay €2,500.

Mr Gill said on the scale of discrimination “it wasn’t a flagrant breach”.

“It was a misunderstanding and he had only recently taken over the pub. It has been challenging times for rural pubs over the last few years,” said Mr Gill.

Judge Marian O’Leary said then why are they not accepting customers.

“The Hegartys are very upset - people who have never drank in their lives and to be refused a drink…” said Judge O’Leary. Mr Gill said: “They should, of course, have been served.”