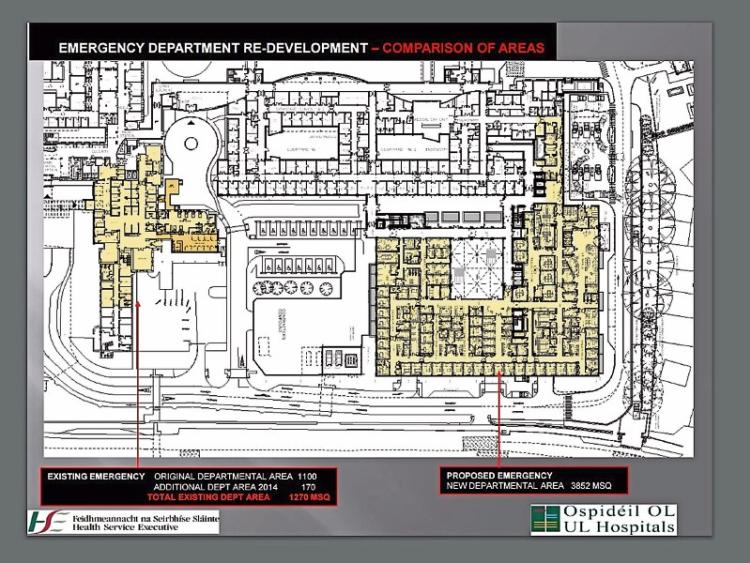 THE OPENING of Limerick’s new emergency department will be delayed by a further two months, the UL Hospitals Group confirmed on Tuesday evening.

Previously, the UL Hospitals Group stated that University Hospital Limerick’s new A&E was “on target” to open by March 2017. However, CEO Colette Cowan has confirmed that it will open in May of next year.

The CEO said that she regrets the delay, but said that it was “more important to get it right than to open too soon without the proper systems and safeguards in place”.

A spokesperson for the Group stated this week that contractors are due to hand over the project at the end of the first quarter in 2017, and that it will “take a number of weeks” for the new department to be equipped and prepared for its official opening.

“Significant training of existing staff will be necessary to allow them familiarise themselves with the new work environment; new patient flow processes and state-of-the-art new equipment before transferring to the new ED, which will be three times the size of the existing ED,” the spokesperson said.

Between 90 and 100 additional staff are being targeted for the new department, in a recruitment drive that is currently underway.

Speaking at a briefing of the Regional Health Forum in Galway this Tuesday, Ms Cowan said that management was “as impatient as anybody” to see the opening of the new emergency department.

“There are over 100 construction workers on site at present. The contractors are making good progress on this major project and we expect the handover towards the end of the first quarter of next year,” she said.

Ms Cowan said that the work involves the construction of a new roadway for ambulances, which will require a “complex rediversion” of electrical services, while ensuring that there is a power supply to the building.

“Significant work has already been done in terms of agreeing an inventory of new equipment and planning a significant recruitment drive. A Project Lead has taken up post this month to drive the project forward.”

A spokesperson for the INMO has previously expressed concerns over the likelihood of securing 100 extra medical staff.

Ms Cowan said that this is “probably the biggest challenge” the hospital faces, adding that there is a “significant shortage” of nursing staff, nationally and internationally.