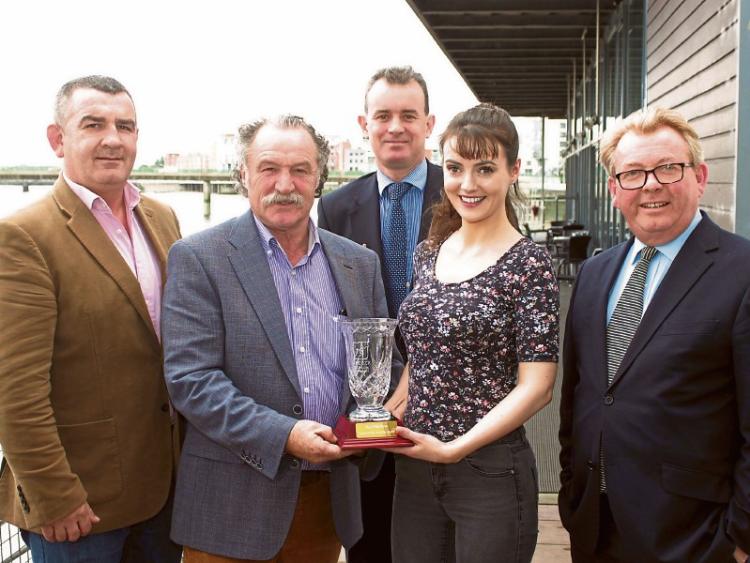 THE MAN behind a social enterprise formed to create employment pathways for the most economically marginalised and socially excluded people in Limerick city, has been named the Limerick Person of the Month.

Ray O’Halloran of Limerick City Build Ltd (LCB) - which has placed 160 people from disadvantaged areas in employment - was presented with the award at the Clarion Hotel this week.

“This isn’t about Ray O’Halloran. There is a team  in this who are all very interesting in promoting Limerick,” said the St Mary’s Parish native who was accompanied at the presentation by Pat Brown, manager, Limerick City Build.

LCB was founded by the entrepreneur and social activist Ray O’Halloran following a brainstorming session by a group of local people.

“It was a group of interested Limerick people who were very worried about the fact that Regeneration had come to Limerick but nobody from the city seemed to be getting work,” Ray explained.

“A lot of the time we were told it was because we didn’t have the skills and we didn’t have the training so we decided that rather than depending on others we would set up on our own training centre and our own skills network and instead of guys needing their Leaving Cert to do a job, all they would need is the right attitude,” he added.

The non-for-profit limited company focuses on achieving a tangible social, economic, physical and environmental dividend for Limerick city by marrying best practice already in use in successful Regeneration projects in other cities.

“It really started in 2008 with the Business Transformation Programme that included UL,” Ray explained.

“After a visit to Glasgow, I saw how the Glasgow model worked and while it is seven times bigger than Limerick, and a little bit different than Limerick and has a lot of problems in the last 10 years they seemed to have solved their problems. For example, Edinburgh would have been the city to go to six or seven years ago but now Glasgow has surpassed it because when the Regeneration moved into Glasgow, they started to work on the people who were unemployed because there is no point in putting glass houses inside in the city if you are not going to put in our own people.”

The LCB training and innovation centre is based at Oscail House, the former Cahill May Roberts building on Bank Place in the city.

“We have 21 start ups and about 140 employed. I like to say that we did it in conjunction with UL, LIT, Limerick City Council but we have all that done with a sandwich and a cup of tea,” smiled Ray who runs Speedline Engineering in Knockalisheen in the city.

“When someone comes into us and they have a good idea then we help them from the point of view that we pay their rent, we pay their insurance, we try to get them work.

“What happens then is we train guys on hand skills - just say the plasterer needs to take on somebody, well then he pays him a proper wage and that’s the social dividend. A lot of those start-ups have gone on to bigger and better things.”

LCB is involved in a variety of projects, many of them associated with the River Shannon.

Through their work LCB work with people from various backgrounds including a number of former offenders.

“We are working with young women and young men and on our board we have a clinical psychologist, a guy who is involved in the Mid-West Drugs Forum. It’s a very unusual mix.

“About 160 have passed through our doors in the last two and a half years. It’s to encourage them to get over that invisible barrier that’s set up between the haves and have-nots in our city.”

“With the continued support from Limerick City Council and Regeneration, going forward we can turn this into something very special.”