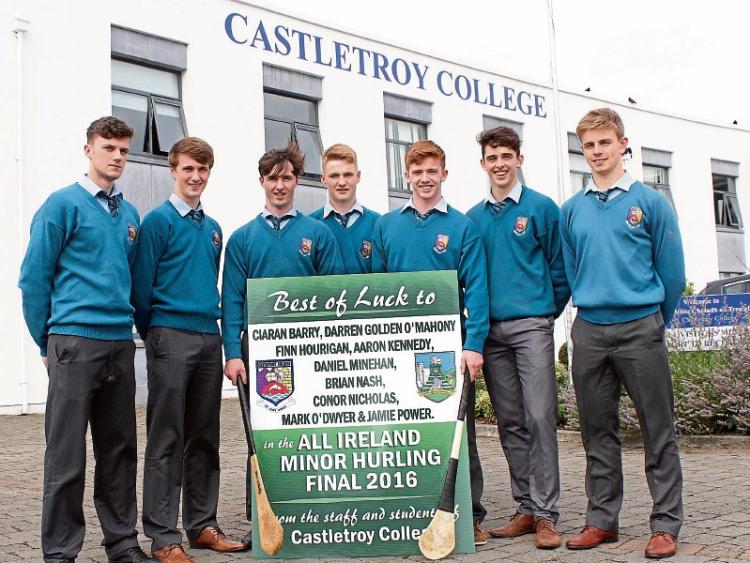 WHILE Castletroy College in its short history has normally been a hotbed of rugby, the school has nine representatives on Limerick’s All-Ireland minor hurling panel.

Nowhere in the city will the attention be more focused on events in Dublin than among staff and students at the 14-year-old school, with many making the journey from Castletroy to Croke Park to watch the All-Ireland decider against Tipperary.

Among the school’s population are Monaleen clubman Conor Nicholas who plays at full-back, cornerback Brian Nash of South Liberties and half-back Finn Hourigan of Murroe/Boher.

Also on the panel from the school are Ahane clubmates Ciaran Barry and Daniel Minehan, Monaleen players Mark O’Dwyer, Jamie Power and Darren Golden-O’Mahony, and Aaron Kennedy of Murroe-Boher.

Although the students have just returned after the summer break, excitement is building ahead of the game.

And while the Premier County may be the favourites to win the final, having beaten the Treatymen once already, there is a quiet confidence.

The lads’ teacher – and former manager of the Harty Cup side – Peter O’Reilly said: “I would always be confident in a two-horse race. Obviously in the Munster final, we were beaten comprehensively. But it is a totally different ball game now. I believe we will give a very good display in Croke Park this Sunday. The whole school is rooting for them.”

Coach Liam Reale adds: “It is not very often you get to an All-Ireland final, so you have to make the most of it!”

“It is a great boost for the lads’ clubs and their parents who would have put in a lot of time and effort,” he added.

Engineering teacher, and current Harty Cup boss – Leonard Coughlan said: “It is fantastic for Castletroy College. What these guys are doing drives on the younger players who are coming up at under-16 and under-14. It is fantastic – we are delighted to see this.”

Asked what advice he would give to the players, he said: “Have no fear if you get your chance – go out and hurl!”

Leonard’s young son Darragh came to the college to meet some of the minors.

Asked who is going to win this Sunday, he grinned enthusiastically, and shouted: “Limerick!”.

Peter said: “There is huge pride in the school. They are nine tremendous lads. Since they came in the first year, their work ethic has been fantastic.

“They are very determined, and when some of them came in the first year, you would not have said they would have played in the position they are in now. But through sheer graft and determination, they got there.”

He added: “Even back then, you could see a professionalism in them. And it is no coincidence they are where they are today: we are very proud of them.”

While hurling has traditionally been the more popular sport in the county, Limerick City is responding, in particular with Na Piarsaigh winning the All-Ireland club championship in March.

Monaleen is supplying five players to the minor panel this Sunday, while two Na Piarsaigh players in the shape of Jerome and Conor Boylan will descend on GAA headquarters at the weekend.

Patrickswell man Peter said: “Hurling in the city is going from strength to strength. The city clubs are putting in a great shift, and it is paying off.”