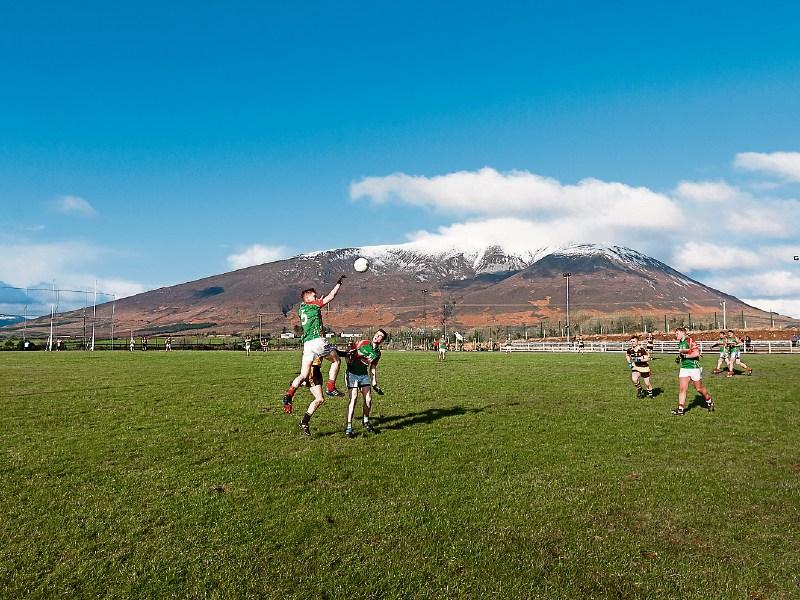 Paul Carroll's took this picture of a junior league match in Bofeenaun, Co Mayo and. Below, in Tournafulla at the right time

WHILE every child dreams of playing in Croke Park - the journey starts at their local club.

It is one of  the beating hearts of rural and urban life and one Limerick man has taken it upon himself to document it.

Paul Carroll has spent the last seven years driving to every county with his trusty camera in hand to capture an intrinsic part of Irish life.

He has covered 50,000kms to photograph games in their unique surroundings. He has driven all the way to Donegal to find out a Junior B game was called off, scored a point when a team in West Cork was short players, not to mention writing-off his Opel Corsa in a serious crash in Leenane, County Galway. His parents, Pat and Ann, didn’t know about the last part - until now!

The man from Gilmartin Park visited around 100 locations and is collating 65 of his favourite shots into a book entitled Gaelic Fields.

Now aged 36, the idea came to Paul when he was in his twenties and, like many, was just living for the weekend and a few pints with his friends.

“I just said this isn’t life, this is not living. I decided I needed a focus,” said Paul, who was working in Cork in the largest homeless shelter in Ireland. He now organises Cork’s Homeless Street League.

“I came across a photographer called Hans van der Meer who did a project called European Fields. He spent 10 years taking photos of soccer pitches at the grass roots throughout Europe. I hadn’t come across anything like this in Ireland and there are lots of GAA pitches everywhere. I didn’t own a car so I bought one and just started travelling to games. I set a target of 10 years to get it done,” said Paul, who had found his focus.

Starting in south Kerry, the self-taught photographer moved up through Ireland. As Paul was working night shifts he could head off during the day or come in early and leave at 2pm.

He did his research to find out the best backdrops

“I wanted to get one in every county. I didn’t want to leave any county out. At a minimum there is one from every county and the maximum is four or five,” said Paul.

One time he drove from Cork to a game in Dunfanaghy, Co Donegal - the furthest possible pitch away from him in Ireland.

“I arrived up from Cork and the game was cancelled one hour beforehand. I realised you don’t worry about things you can’t control and I can’t control whether a junior B tie in Donegal is cancelled!”

Other times he went to a match and the lighting was bad or he didn’t get the shot he wanted.

“I had to go to the same pitch in Longford three times before it worked. These people were thinking who is this lunatic showing up every Thursday night from Cork for the junior B group championship match!

“I loved going to the games with the junior B lads. There is actually no reason for these lads to be doing this, none whatsoever other than enjoying it and having a bit of craic with the lads. I love that. That is way more interesting to me than taking photos of inter-county players. You are seeing vibrancy.

“I absolutely love sport and it goes back to my job and the positive and mental benefits of playing sport. Playing a game of five-a-side or hurling and you score or miss a goal - you are getting a high for the week or the miss is in the back of your mind for the week,” said Paul, who played football and soccer in Murroe when he was a teenager.

When he turned up at stunning locations a refrain he often heard was, “Ah sure, we probably take it for granted”.

But looking at the bigger picture, Paul sees GAA clubs as part of the “social glue that binds a community together”.

The two grounds he visited in Limerick were in Tournafulla and Pallaskenry, which is beside the church.

“The photo is important in the whole story of Gaelic Fields. It highlights the direct relationship between the church and Gaelic Games down through the years.”

In Tournafulla he went around the field and took pictures from near the windmills.

“Then I decided to come back to the gates. As I stood on a fence the couple in the photo walked by. It was one of those great shoots where I took 10 pics and I realised I had got something worthwhile.” 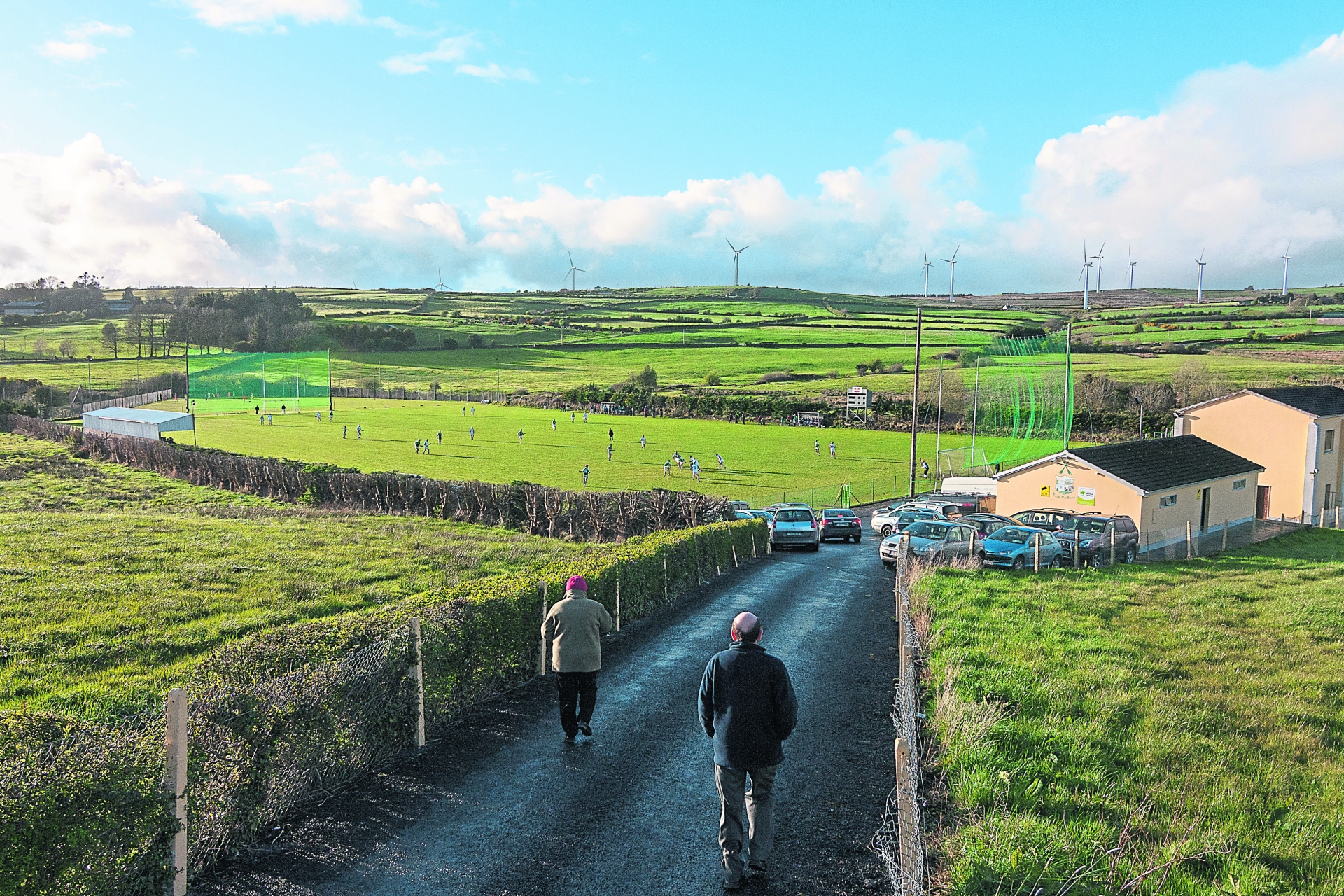 But his and everybody’s favourite is Inishturk, an island off Mayo.

“It is carved out of rock. It was one of myself and my girlfriend Kim’s first trips together. We actually went the wrong way to the game by going up over a hill. I took the photo, there is a road leading down to it, there is couple of sheep and horses to the right and old ridges from the potato famine. It takes a second to figure out there is a game going on down there and it is a pitch. It is just incredible.”

A few years previous he missed the ferry to Inishturk.

“The weather was diabolical, I was coming around near Leenane in Galway and I got a horrible feeling. I wasn’t speeding but when I came to an S bend the car spun, hit the ditch, flipped end over end and I ended upside down in a dyke.

“A pool of water had lodged on the road and I was after aquaplaning. I wasn’t hurt. A local fella came up to me and said, “I see you were doing a bit of parking!’

“I never told my parents what happened the Opel Corsa! I didn’t want to be worrying them, just get on with life and there was no one killed.”

A Passat carried him the rest of the way on his journey which is nearly at an end. He says choosing the photos is like picking your favouite child.

“It is very, very difficult - the ones that I am having to leave out, incredible ones. I don’t mean that in an arrogant way, the locations are incredible. I think a monkey could do what i was doing.

“I follow the flow of the GAA season and that is the way it is going to be documented in the book. It starts out with the cold, dirty weather of February when the club league season start. I structured the whole book by light.

“It is really dark at the start then it goes to dull, then high afternoon light and softer evening light – that is how it is structured.”

Paul is crowdfunding through Kickstarter to finance the project and needs to raise €10,000 by September 2.

Go to www.kickstarter.com and search Gaelic Fields to preorder/pledge to buy a copy.