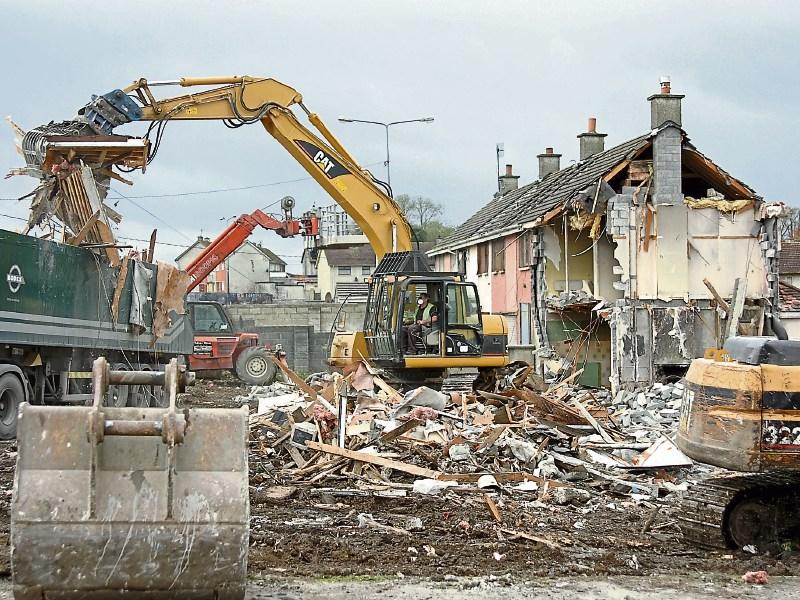 Demolition: Houses are knocked in Southill

AN average of more than €28m a year has been spent a year on the Limerick Regeneration project since 2008 – almost €258m since the programme kicked off in 2008.

But just 110 new housing units have been built in that time, while 1,039 buildings have been demolished, figures obtained by the Limerick Leader reveal.

Mayor Kieran O’Hanlon has said he is “surprised” at the sheer cost of the demolitions.

But a Limerick City and County Council spokesperson says the local authority is now prioritising retaining houses as opposed to knocking them.

Carmel Kirby, the council official responsible for the programme addedthere is more to the process than just the physical building work.

She said while construction of further houses is continuing, there has also been activity in the areas of social and economic regeneration, including after-schools services, children and parenting proogramme, plus music, sport and outreach initiatives.

A major analysis by this newspaper this week has also revealed that just eight per cent of the original projected spend of €3bn on the project which should have transformed Moyross, Ballinacurra Weston, Southill and St Mary’s Park, has actually been used.

And there are deep seated reservations about the process among the communities at the front line, and Limerick’s political representatives.

Over 1,000 homes have been demolished – many of them only dating back to the 1990s – since the regeneration process began in the late 2000s, leaving many communities angered, and questioning why these units were not just refurbished, especially with thousands on the housing waiting list.

Mayor O’Hanlon said: “I do hope we are at the stage where we are rebuilding communities rather than demolishing houses. The council is back building good quality homes to replace some of the houses which were knocked.”

A council spokesperson said after the regeneration scheme – set up independently of the council in 2008 – was transferred to the local authority, a review “resulted in a focus on retention and refurbishment options rather than whole scale demolitions”.

Limerick Regeneration began life as a hugely ambitious scheme to provide among other things, a new rail station and main street ‘spine’ in Moyross – which would become a promenade on Thomond Park matchdays – plus a new business and retail offering in Delmege Park. On the southside, there were plans for “landmark buildings” at the former Krups site near Southill.

However, in 2013, these plans were scaled back significantly.

And the council has said this year, these plans will also be revisited.

With very few jobs created from the process thus far, there are now proposals in place to ensure jobs for residents in the community in the next year.

Ms Kirby explained: “Sustainable communities require sustainable jobs and appropriate training for residents in the four communities to become ‘job ready’. This will be the focus in the coming years in terms of developing more training opportunities and engagement with the private sector that will lead to employment.”

Labour councillor Joe Leddin, who has represented the southside on the local authority since 1999, believes Southill, with its many empty spaces is well placed to take advantage of “light industrial” jobs.

He said: “I think the real failure in this has been in terms of the economic, in terms of the job creation. From the point of view of Southill, which is now vast tracts of open green space, I think we need to look at the economic side of trying to redevelop these areas by putting some kind of low density light engineering, light industrial in there.

"While Southill is the biggest challenge, I think it also offers the greatest potential. There is significant land there, as well as handy access to the Southern Ring Road.”

- For a four page analysis of regeneration, see the print editions of the Limerick Leader