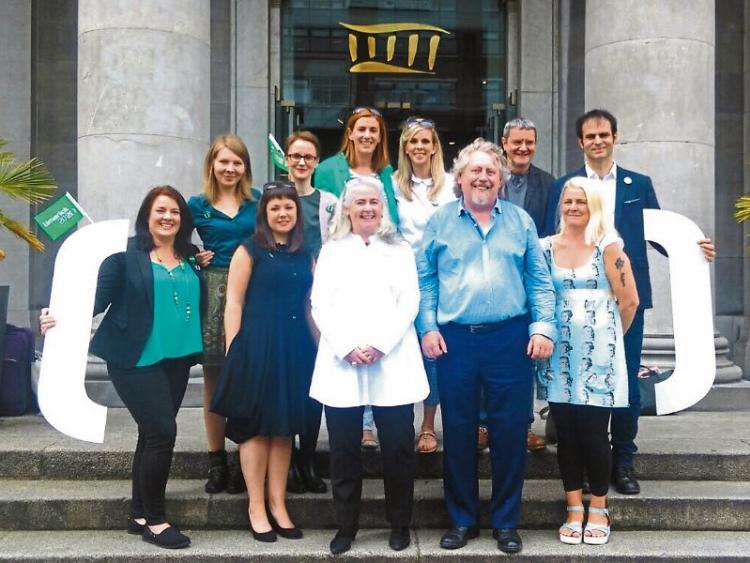 Still smiling: the Limerick 2020 team at the National Concert Hall after the European Capital of Culture announcement

ARTS minister Heather Humphreys has urged Limerick to “keep the momentum going” despite not winning the European Capital of Culture 2020 bid.

There was agony for the Limerick 2020 bid team at the National Concert Hall in Dublin on Friday as Galway was named as the winner of the prized designation, worth an estimated €170m, according to some estimates.

The City of Tribes squeezed past Limerick and the Three Sisters bid of Waterford, Wexford and Kilkenny in being named European Capital of Culture (ECOC), the third time an Irish city will hold the designation after Dublin in 1991 and Cork in 2005.

Minister Humphreys told the Limerick Leader after the decision that “there was a huge amount of work put into this in Limerick and the Three Sisters as well, and I think, I know, that there is great plan in terms of culture and of course Limerick will continue to build on the very successful National City of Culture.

“So I would encourage Limerick to engage with communities, to continue to develop this cultural strategy that they have, and their application, it is all in there, and to keep the momentum going,” she added.

Steve Green, chair of the judging panel – which went right to the wire in making a difficult decision – said that they were “three very, very strong bids”.

“It is a momentous day for Limerick and the Three Sisters, not just Galway. Because it is more, in a sense, the ECOC competition has become a journey and one city is going to get higher publicity, but the other two now have got cultural strategies and that momentum and enthusiasm that we saw earlier in the week in the streets of Limerick, that has to continue,” he said.

“What no longer happens is the bid is put on a bookshelf and everybody forgets about it; everybody, whether media or citizens (must ask) what are going to do now? So that makes it a really positive activity.”

“Limerick saw on Tuesday the feeling and the ambition of the people getting behind the bid. I suppose we have to figure out a way that doesn't dissipate, that we don't lose that,” he said.

“Obviously we are disappointed, but fair play to Galway, they have really had to work hard to get this and it will be a fantastic year for them. Certainly, we have every intention of working with them and collaborating with them. So it will be of benefit to Limerick also, and we will just have to treat it like that.