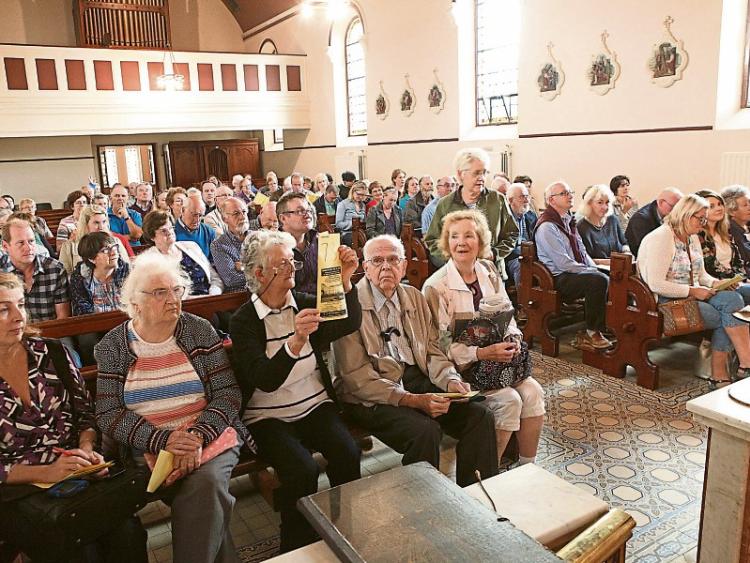 Praying their bid is accepted: The auction of 630 lots took place in the chapel of the closed Sisters of Mercy convent in Doon

IT WAS STANDING room only in the beautiful chapel in the former home of the Sisters of Mercy, Doon on Saturday.

The convent officially closed on July 1 and the auction of its contents commenced at noon. Over 500 gathered for the sale of 630 lots made up of a huge range of glass, china, furniture, brass, religious antiques and collectables.

PJ O’Gorman, auctioneer, remained tight-lipped on the turnover on the day but it is safe to say the contribution of the Sisters of Mercy to Doon and surrounding parishes has been priceless. Last year, they celebrated their 150th anniversary of coming to Doon.

It was the closest thing that Mr O’Gorman will come to being a priest as he had the chapel congregation’s complete attention.

Ably assisted by his daughter, Maria O’Gorman Skelly, they started at 12pm and finished at 7.30pm to a warm round of applause.

“Once I heard that I said to myself the people enjoyed it. The atmosphere was unreal. Both aisles were full.

“I auctioned the Christian Brothers’ contents in Doon in 2000 so it is a great honour to be able to say that I did both of the religious orders that were in Doon for so long – and they both went well,” said Mr O’Gorman.

It was one of the longest auctions in his 51 years of experience.

Over 500 attended throughout Saturday. Many in attendance were former pupils who travelled from near and far. The sentimental value of the lots was through the roof.

Mr O’Gorman said one elderly gentle man purchased a choir stall – which go along the wall in a panel and each nun has their own seat.

“It is gorgeous, fantastic craftsmanship. There was great local interest in that and the man who bought it said his grandfather made it. There were a lot of touching stories,” said Mr O’Gorman.

The most expensive lot of the day was a book of illustrations of the Stations of the Cross for €1,600. A pine confessional, which attracted much interest in the run up to the auction, went for a bargain €180.

When Mr O’Gorman’s gavel came down for the last time it marked more than the last bid being accepted, it felt like the end of an era. Soon the convent will be empty and plans are being put in place to ensure it continues to be an important part of the parish.

The seven Sisters of Mercy, who have left for new locations, will always be welcome in Doon. A Mass of thanksgiving was said by Archbishop Kieran O’Reilly in June for the nuns and their predecessors.

It all began in 1865 when the Sisters of Mercy arrived in the east Limerick village from Kinsale convent.

They came at the invite of then parish priest, Fr Patrick Hickey as he saw his flock ravaged by post famine poverty, devastation and emigration.

One hundred and fifty one years on the last word should go to current parish priest, Fr Tony Ryan. He said their physical legacy can be seen in the site they gave for the community centre, the land for the GAA field and a site for Scoil na Trionoide Naofa.

What can’t be seen is their contribution to individuals, education and local life.

“They have touched the lives of all our people. They are loved and respected by young and old. The good they have done is known to God alone,” said Fr Ryan.