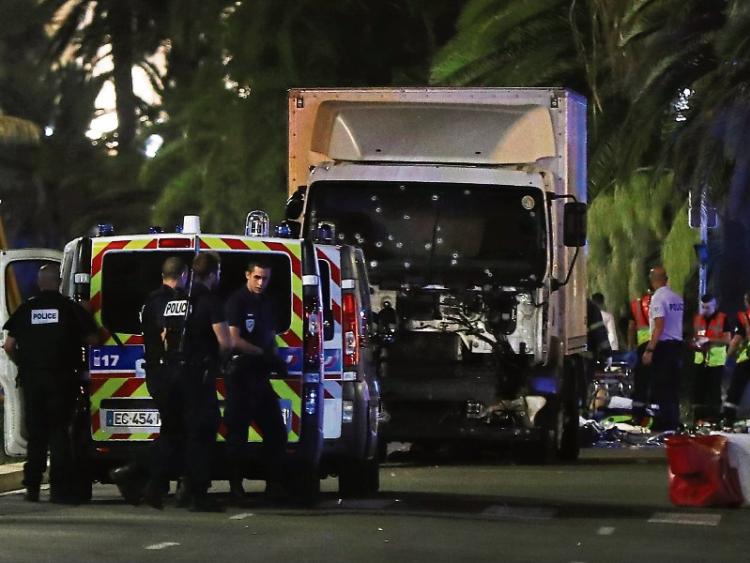 The aftermath of the shocking incident in the holiday city of Nice, France

A LIMERICK man who is on holidays in Nice has described the terrifying scenes which saw 84 people were killed after an armed truck driver drove through the Bastille Day celebrations in the French city.

David Allen, 26-year-old native of Ballybrown, was less than an hour in the country when he noticed a concentration of blue lights, sirens and panic on the streets of Nice, at around 10pm yesterday.

He was walking along the promenade — a few hundred yards from the attack — with two Irish women in their 40s when they spotted people running from the scene that left 84 dead and more than 100 injured.

“I did not know what was going on until my father text me and told me that there had been an accident, and that it had just come on the news. And as we were walking up, people were running away telling us that it was a terrorist attack. This was only within 10 minutes of it actually happening. We just kept walking on and walking past people who were saying that it was absolutely awful. A few people told us that there was an attack and that dozens of people were dead.”

He said that they were able to “keep calm” until they spotted numerous bodies, covered in white sheets, on the streets.

“As we were walking towards it, we could see white sheets on the ground, and we couldn’t understand that there were no police around them — it was just four or five bodies covered in white sheets, blood all over them, and a handful of people around with them. There were no emergency services, and as we got closer and closer, there were more ambulances, and the police told us that we couldn’t go any further.

“The two women just pointed ahead and said, ‘Jesus, they are all dead bodies. Jesus, no.’ The armed police then approached us and just told us to get off the promenade and try to avoid it. They saw that we were tourists, carrying our suitcases, so they were nice about it and said: ‘You don’t want to see what’s up there. It’s absolute carnage’,” he told the Leader, early Friday morning.

Mr Allen, who has been holidaying in Nice since he was three, said that he has never seen the city this quiet.

“People were celebrating Bastille Day, and it holds the same significance as St Patrick’s Day. And while I was walking home last night, I was walking home through one of the busiest parts of the city, and there was barely anyone on the streets. Restaurants were closed, and they had left their tables and chairs outside, they didn’t bring them back in.”

Early this morning, Mr Allen, who works in insurance and is a University of Limerick graduate, was searched entering the local shopping centre. He said that all people are being searched in built-up areas.

He added that his family and friends in Limerick are “very relieved” to see that he is safe and well, and that his phone “has been hopping all night and all this morning”, since the attack occurred.