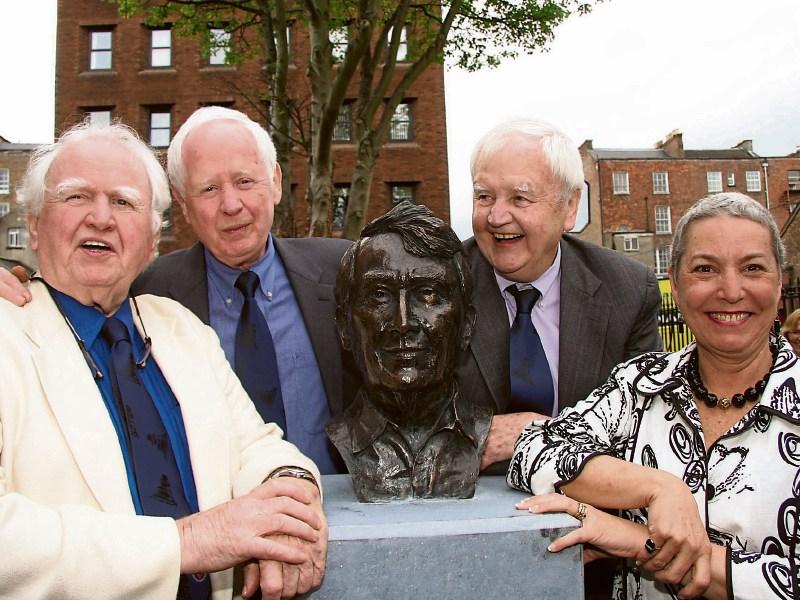 Malachy, Alphie and Mike with Ellen at the bust unveiling

“WE’RE here today and we’re gone tomorrow. We had our good times, enjoyed each other and made the most of each other. We’re all passing on through.”

Those were Alphie McCourt’s poignant words during one of his visits to Limerick in recent years, as he spoke about the death of his famous brother Frank, of Angela’s Ashes fame in 2009.

On that occasion, he travelled from the US to unveil a bust of his Pulitzer Prize winning brother outside the Frank McCourt museum.

He would return again to see the musical production of Angela’s Ashes on stage in the Lime Tree theatre, and again to unveil a plaque in memory of Frank at South’s Bar as part of the Limerick literary trail.

Alphie, a writer himself, who penned two memoirs and wrote for many notable publications including The Washington Post, passed away on Saturday last in New York after taking an afternoon nap.

He dedicated the first of those works, A Long Stone’s Throw, to his brothers for “blazing more than a few trails”, to his daughter Allison, “the music in my life”, and to his wife Lynn, his “pulse”.

“I felt I should tell my part of it because my experience was very different from my brothers,” he said. “Somebody asked me that before and I said ‘So I would not be a footnote in the history of my own family!”

It is the second death in the family in the past year, leaving Malachy McCourt, 84, as the only surviving son of Angela and Malachy from the backlanes of Limerick. Brother Michael, 79, a much-loved bartender in San Francisco, passed away in September last.

Just a week before he died, Alphie, 75, spoke of the importance of creative writing and the “innovation” of the University of Limerick in that field, at an event in New York to commemorate his brother Frank.

Professor Joseph O'Connor, who holds the Frank McCourt Chair of Creative Writing at UL, said Alphie “was admired and widely respected all throughout New York’s Irish community, and among the city’s writers and literary circles he was absolutely loved”.

“A gentle, funny, courteous and witty man, he was a strong supporter of UL’s inaugural Frank McCourt Creative Writing Summer School; indeed, he spoke at our Tribute To Frank McCourt in New York last weekend and brought the house down with the funny, heartfelt and moving speech he made with his brother Malachy.

“Alphie, a gifted writer himself, will be greatly missed by all who were blessed to know him,” said Professor O’Connor.

In a brief video recorded at that event, Alphie spoke about his own writing process, and how as a member of the Limerick Debating Society in his youth “there were endless debates about the need for a university in Limerick”.

Then he said Limerick were the “poor relations” in terms of third level education, but he now praised the university as “forward looking and open to innovation”.

“There is nothing more forward looking or innovative than creative writing,” he added.

Since his sad passing, tributes have been paid on both sides of the Atlantic to Alphie.

Dominic Taylor, of the Limerick Writers' Centre, was saddened to hear this news but said “it was a privilege to have known him”.

Adam Howell, who produced the musical of Angela’s Ashes, staged for five nights in the Lime Tree theatre in Limerick in 2013, also paid tribute.

“He became a great supporter, confidant, advisor and friend. I used to joke with him that I had to pinch myself sometimes because he’d always been a ‘character’ in a book and film and now I knew the real person,” said Mr Howell.

“He always found that funny, I think. He was extremely generous and giving,” he wrote.

Born in Limerick in July 1940, Alphie grew up in the city, before emigrating to America in 1959, spending a good part of his life in the restaurant and bar trade.

During his youth he toyed with the idea of journalism, and later undertook a degree in law at University College Dublin, which he didn’t finish.

While Alphie went to the Christian Brothers, played rugby with Young Munster and was a member of the Limerick Debating Society, he said he always felt a little bit removed from Limerick life.

He left for the land of opportunity at the age of 19, and alternated between living in New York, then Montreal in Canada, before moving down to California, and settling back in New York.

He built swimming pools in California - “a different kind of university”, and was drafted into the army for two years, where he was a food inspector.

The youngest of seven, Alphie was the last to leave Limerick, and left with his mother Angela, now immortalised in his brother's first memoir, Angela’s Ashes.

His funeral was held this Wednesday at the Riverside Memorial on Amsterdam Avenue in New York. There is also a planned memorial later in the year.