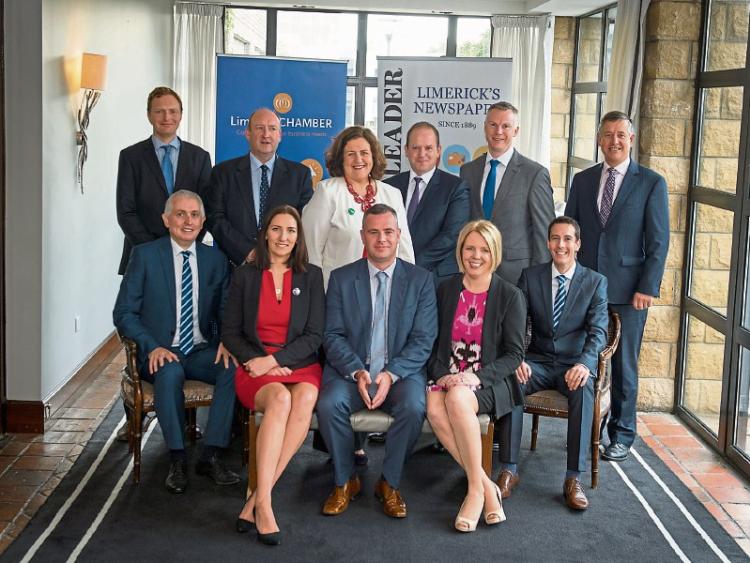 TOP businesses across Limerick and the Mid-West will be recognised for their efforts at the sixth annual Limerick Chamber Regional Business Awards in November.

The awards, which are sponsored by the Limerick Leader, will be held on Friday, November 25.

Around 400 local business leaders will be present at the awards, where 11 local companies will be rewarded for their efforts.

A number of prizes are up for grabs, from the Best Emerging Business right up to the Overall Business of the Year award, and the Chamber president’s award, a lifetime achievement prize given by Catherine Duffy, Northern Trust.

The awards were launched at a special breakfast briefing, where Fergus Frawley, group manager of Raheen-based Kirby Engineering, which won the Chamber Business of the Year last November, gave the keynote speech.

This year’s awards has one new category, with the Best Family Business award introduced for the first time.

The awards are open to businesses based in Limerick, Clare, Tipperary, North Cork, North Kerry, including both members and non-members of Limerick Chamber.

The shortlisted companies, win or lose, will also have an opportunity to secure strong media profiling, with each to be featured in the Limerick Leader.

Ms Duffy predicted the growing confidence in business in the region will be reflected at the awards ceremony.

“If you think of where the local economy was at when these awards started in 2011 and where it is today, you realise just how far Limerick and the region has come in the intervening period. Much of that, of course, is down to the very positive efforts by government at local and national level in creating a pro-business environment and the development agencies in stimulating very strong inward investment here,” she said.

However, she added Limerick and the region would be nowhere were it not for the levels of “entrepreneurship, innovation, courage and drive” that has flourished amongst the business community.

“We have a vibrant start-up and SME environment and this has been critical, too, in attracting inward investment as the ecosystem is clearly in this region to support it,” she added.

The closing date for receipt of entries is Friday, September 23, with the shortlisted companies to be announced on Thursday October 20.

Entrants will be judged by an independent judging panel comprising of senior management teams of the award sponsors along with members of the Limerick Chamber board.