'People's Bridge' may be alternative to controversial Limerick footbridge

Editor Alan English is won over by an innovative and inclusive alternative to the footbridge on the Shannon, which has generated controversy and much negative feedback since it was first proposed 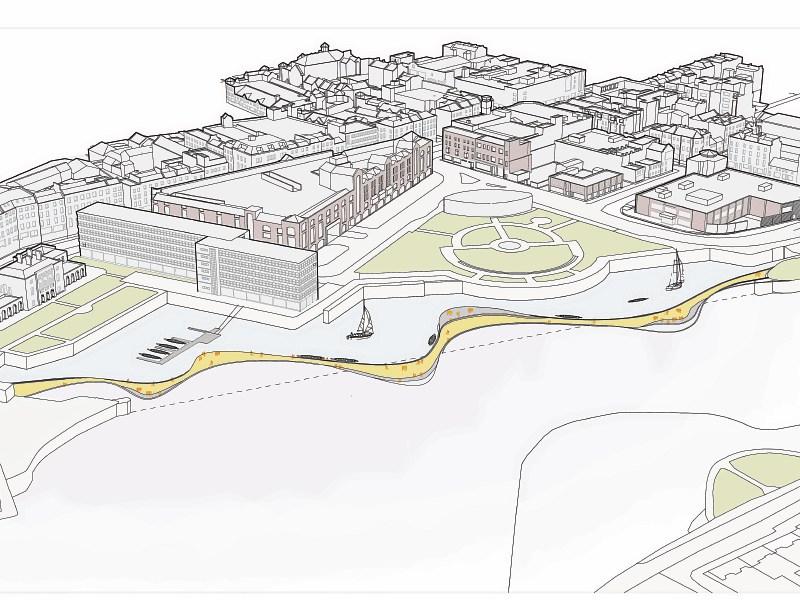 The Leader is backing this dramatic floating boardwalk across the Shannon as alternative to the footbridge, which has been proposed by Healy & Partners

DEBATE is healthy and when the future of our great city is at stake, it’s nothing short of essential. That’s why the Leader returns with a vengeance this week to the controversy over the proposed footbridge on the River Shannon.

We have stated all along that the project as outlined is fatally flawed, a pointless waste of up to €18 million (or is it €12m? Nobody seems to know). Now we are championing an exciting alternative proposal revealed for the first time on this page.

Like it or hate it, the footbridge idea has done Limerick a service. It has inspired thousands of lively conversations. It has galvanised many who have expressed outright opposition to it with a passion that is rooted in love for our city and concern about how it should move forward.

It has been made clear that the money available from the public exchequer and a private donor is for an “iconic” riverside project only. That excludes a lot of alternative city-centre projects, but it does not exclude a more sensible alternative to what has been put forward — the pointless bridge.

I’ve taken part in plenty of footbridge conversations myself, including several with the architect Michael Healy, whose practice — Healy & Partners — adjoins the Leader’s editorial offices. Michael agrees with me and many others that that the proposal as it stands is a problem. He also wants to help with a solution.

So does Hugh Murray, another esteemed Limerick architect. In the eloquent article he has contributed, he outlines why the existing proposal is such a failure and suggests alternative waterfront projects.

With councillors due to discuss the project this month, these thoughts are a timely and welcome contribution to this important debate.

Last Friday, Michael Healy visited the Leader office clutching the plans you see illustrated on this page, which have been produced by Richard Rice, a partner in the firm. He was excited. When I saw them, I was too.

Instead of a bridge that has no real purpose, imagine a floating boardwalk across the river, with enough going on to make it the People’s Bridge, or boardwalk. Best let Richard sell the idea himself: “This alternative strategy has the river crossing starting at Honan’s Quay and going over to the rear of the island of Shannon Rowing Club, then down onto the floating boardwalk located over the weir wall.

“The boardwalk achieves a connection linking over to the Potato Market, with the opportunities for activities and kiosks on the route. The engineering of these boardwalk platforms would be similar to the river platforms currently used on the river (Georges Quay, Hunt Museum and Poorman’s Kilkee).

“The development of such a design solution makes the project a destination rather than a route. It connects effortlessly with the boardwalk project that has been completed around the river edge generally. Activities on the boardwalk can be kiosks (coffee/ sweets/chowder), public space, theatre and river experience points, a swimming pool, a base for the kayak club, angling points and so on.

“The difference in river levels means that the experience of using the crossing changes from high tide to low tide, from calm to the noise of the Curragower. Limerick has a unique daily experience in how different the Shannon can look every time you view it. The level of the water can vary by more than four metres.”

This ever-changing river experience is a key part of what I believe would be an outstanding amenity for both the people of Limerick and visitors to our city. It would cost no more than the pointless bridge. Vitally, the fact that the boardwalk floats at river level means there would be no negative visual impact on the majestic Hunt Museum, which many have a real problem with.

The existing proposal is further challenged by virtue of the fact that the bridge has to accommodate river traffic. That would not be a problem with this alternative proposal, Richard says. He adds: “Navigation of the river by boat is also not hindered by the proposed design approach, with possible tie up to the boardwalk also a possibility. The creation of activities on the crossing make the location a destination. This design approach reinforces a strong experience of the river – a direct connection. The crossing has a purpose; therefore, it is not pointless!”

Now it’s your turn. Do you think the alternative illustrated above would be a better way to spend the money available for an ‘iconic’ riverside project than the existing bridge proposal? Contribute to this important local debate by emailing news@limerickleader.ie or writing to The Editor, 54 O’Connell Street. Please include your contact details.