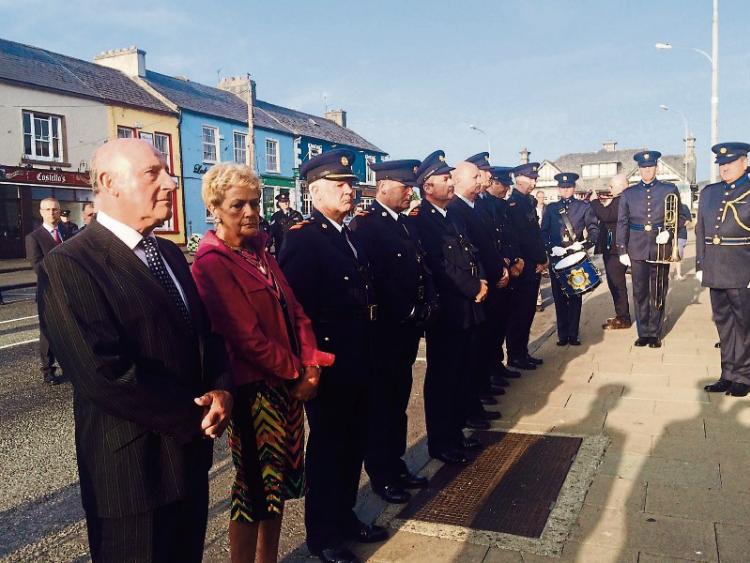 Ben O'Sullivan, Ann McCabe, chief super David Sheahan and other gardai at the ceremony in Adare

TWENTY years to the day, the hour, the minute that Detective Jerry McCabe was killed in Adare, the picturesque Limerick village came to a standstill this Tuesday morning to remember the fatal events of June 7, 1996.

At precisely 6.53am, the six-piece Garda Band played The Last Post, a song long associated with death and remembrance, traditionally sounded at military funerals.

Today it took on another, more haunting meaning as Adare remembered a man of the force killed indiscriminately by members of the IRA during the course of his duties during a botched robbery.

Ann McCabe lined up outside Adare garda station – opposite the post office where her husband was fatally shot three times – flanked by Ben O'Sullivan to her right, who was with Jerry that day and miraculously survived after being shot 11 times.

Twenty years to the day and hour: Ann McCabe lays wreath in Adare in memory of Jerry @Limerick_Leader pic.twitter.com/KsSrcPLK9j

Both detectives, who started in the branch together 23 years previously, were escorting a cash in transit van at 6.50am when their car was struck by a 4x4.

Of the 15 rounds fired, one hit their car, three hit and killed Det Gda McCabe, and 11 struck Det Gda O'Sullivan.

To Ann's left stood Chief Superintendent Dave Sheahan, and Superintendents Derek Smart and Tom O'Connor, among dozens of gardai and the public, who lined the road as it was cordoned off for the ceremony.

Chief Superintendent Sheahan said in advance that the brief memorial service would provide “an opportunity for reflection for us all to help the healing process and remember our colleagues who have been killed in the line of duty”.

“It’s a significant day for us, the 20th anniversary of his death. It was a traumatic time for the division and what happened shows the difficulties of the job and which many face."

It was a solemn, moving occasion where words were few but the emotion of the occasion nonetheless weighed heavily on the family, the gardai and the wider Adare community, who gathered in the early morning sunlight to pay their respects once again.

Supt Sheahan said the words of US President John F Kennedy, who visited Limerick more than 50 years ago, were particularly true and fitting on this occasion.

“A nation reveals itself not only by the men it produces but also by the men it honours, the men it remembers,” he said, quoting the assassinated US President.

Among those who acutely remembers the events of that day was Willie Jackson, 67, from the Ballysimon Road, who drove the delivery van to the post office.

"We just arrived in the village," he recalled. "I had the back of the truck open and was chatting to the lads [the detectives] before I started to unload the mail and the next thing the jeep arrived up in the village and crashed into the back of the patrol car and the two boys jumped out, started shooting straight away.

"I was sitting up in the back of the van and I jumped down because I thought if I got away from the van I might be safer. They just pushed me against the wall of the post office and their getaway car arrived then. They seemed to be in a panic, things didn't go accordingly to their plan. One started shouting 'Leave it, leave it, come on.'

"They sped off and I went back to the patrol car to see could I help the two boys and I was talking to Ben for a minute, and he realised that Jerry was dead. I was trying to keep him calm. It doesn't feel like 20 years now. It's kind of nerve wracking now being here. We're lucky to be alive. It happened so fast," he told the Limerick Leader.

Mrs McCabe, who was accompanied by her daughter Stacey and son John, as she laid two small bouquets of pink and peach roses outside the station, maintained a dignified silence at the ceremony.

In one of the prayers of the faithful outside the station, Stacey fought back the tears as she spoke of the support of the community in the two decades since.

"We pray for the love, life and laughter you brought to our lives," she said of her dad. "We pray God will bless the members of An Garda Siochana and all those working in the emergency services."

Nephew Jerry prayed for "Jerry's gentle soul, and that he may be at peace. In the midst of the mystery of suffering, we pray the God will grant us serenity to accept the things we cannot change, the courage to change the things we can, and the wisdom to know the difference."

Mr O'Sullivan, now 72, and living in Corbally, was overcome with emotion, as he remembered his friend and colleague. He retired in 2001 and was twice awarded the Scott medal for bravery.

"The ceremony here this morning has brought me to my knees", he said, adding that he's thankful to be alive, when Jerry was not so fortunate.

"I have come to terms with living with what happened, but I'll never forget it, and all these people here today won't forget it either. Time is a great healer and time thankfully has come to my rescue with regards recovering fully.

"Jerry is gone in reality, but in memory he'll never be gone. Jerry and myself joined the detective branch in 1973, on the same day. For the length of time that we served, there was scarcely a day that we were separated because we worked as a team.

“Wherever you saw Jerry, you saw me, and regrettably today you see me - without Jerry. A smile is useless unless you give it away, and every time I saw Jerry a smile was evident. No job is difficult if you have someone to smile to; the long face doesn't get you anywhere."

The events of that day are still "crystal clear" in his memory.

"You're not supposed to forget that. You're meant to take up the gauntlet and accept that it happened.

While Ann declined to comment at today's event, she spoke in recent times to this newspaper about how living without Jerry hasn’t become easier with the passage of time.

“It never goes away, and I wouldn't wish it on anyone else. I had one grandchild at the time [of Jerry's death], now I have six, one girl and the rest are boys. He's missing out on that because he was a great family man, but I'm sure he's looking down on all of them. We speak about him all the time. I wasn't that young when Jerry died — too young for me, too young for Jerry, to lose him.”

Pearse McAuley was sentenced to 14 years in prison for his part in the killing of Detective McCabe. The Tyrone man was one of four IRA men who pleaded guilty to his manslaughter.

Along with Michael O'Neill, Jeremiah Sheehy and Kevin Walsh, McAuley had been charged with murder but the charge was dropped when key witnesses refused to co-operate after IRA intimidation.

There was a notable absence of any political representation in Adare this morning.

Fine Gael deputy Patrick O'Donovan tweeted to say: "Twenty years ago this morning, Limerick and Ireland was numbed by the murder of Det Gda Jerry McCabe. May we never forget."

Twenty years ago this morning, Limerick and Ireland was numbed by the murder of Det Gda Jerry McCabe. May we never forget.

The Henry Street detective will also be remembered in his native north Kerry, where a memorial plaque will be unveiled in Ballylongford this coming weekend.