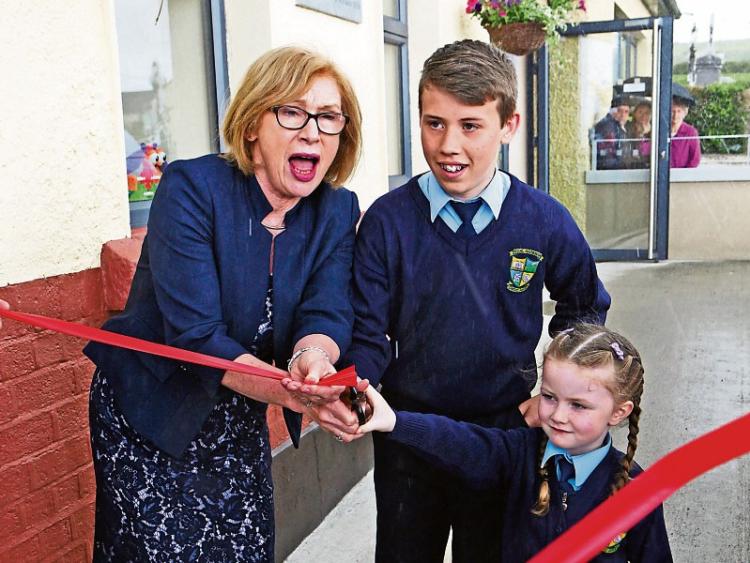 THE youngest and oldest students of Knockainey National School joined former Minister for Education Jan O’Sullivan at the official opening of the educational facility which has undergone a revamp to the tune of almost half a million euro.

In the region of 300 people turned out to see the end result of four years of fundraising and hard work.

“The two existing rooms were refurbished, three new rooms were built and then two resource rooms were built on - that all tied in with a new hallway and a new office as well,” explained John Macnamara, who was MC on the day.

The school now has five new mainstream classrooms, two resource rooms and a special area to cater for children with special needs.

“We now have five mainstream teachers, one resource teacher, one shared resource teacher and four special needs assistants, one caretaker, one secretary and one cleaner,” said Mr Macnamara who is also chairperson of the fundraising committee.

“There are now 130 students in the school and the number is steadily increasing,” he added.

According to Mr Macnamara, the school was built by three different builders in three different phases, with two different engineers, and was developed, built, completed and paid for in four years.

“The €105,000 wasn’t raised overnight,” he pointed out. “The fundraising group deserve great credit. They probably met every Monday night for three years during the school term - they were fiercely committed. I don’t think the school would have been built without them and if it was built it wouldn’t have been built so soon.”

Jan O’Sullivan who was Minister for Education when the development was underway, performed the official opening, cutting the tape with the oldest male student in the school, sixth class student Aidan O’Riordan, and the youngest female student Lucy Murphy O’Regan of junior infants.

The dignitaries included Archbishop of Cashel and Emly Kieran O’Reilly who blessed the school, other local politicians, clergy who had served in the parish, the Presentation Sisters from Hospital Convent, and teachers and principals from other primary schools and secondary schools in the area.

Jack Macnamara who was for 30 years an inspector in the Department of Education was also present.

The chairperson of the board of management Fr Liam Holmes pointed out how he was very proud to be parish priest when the development was being done.

Mr Macnamara then called on school principal Marie Moloney who said that we now have a school capable of meeting the educational requirements of all children.

Knockainey National School was officially opened in 1938 with two rooms and three teachers. For more photos see page 21 of the County edition only