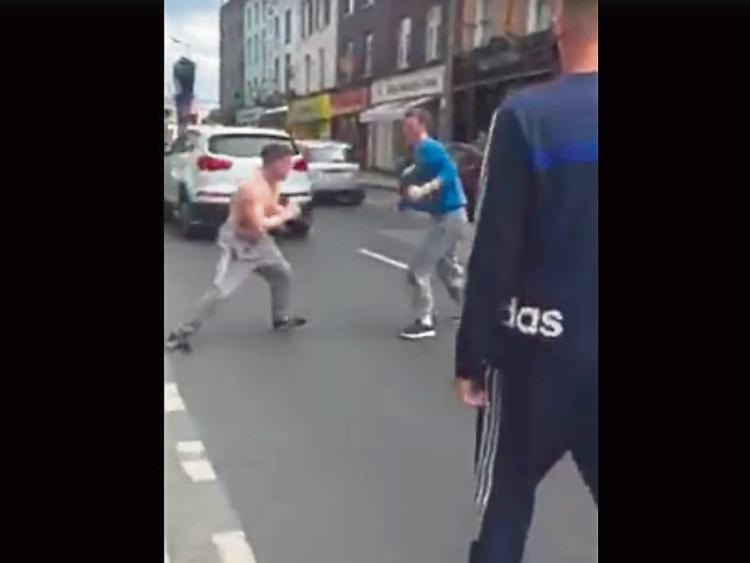 A still from the footage which was posted on social media

GARDAI investigating a street brawl in the city centre last week have confirmed that two men have been arrested and questioned about the shocking incident.

There was considerable public anger after video footage of the fight – between two bare-chested men – was posted on social media minutes after the fight had ended.

The fight, which happened on William Street shortly after 4pm on May 23, also attracted criticism from local businesses who have called for a greater garda presence in the city centre.

“It’s scary this kind of thing can happen on the street, and it highlights how necessary it is to have a garda presence every day,” said Michael Gleeson whose store, Gleeson’s Shoes, is located near where the fight took place.

While not present at the time, Mr Gleeson said what happened was “very frightening” for his staff.

“My first reaction is that it is just stupidity. It is one of those things which can happen at any time and anywhere.”

Tens of thousands of people viewed the video footage of the fight which moved between the footpath and the middle of the road.

Throughout the video, which was recorded on a smartphone, another man can be heard  encouraging the men to  throw punches, “uppercuts” and “jabs” at each other. Later, he shouts  “if ye are not (finished), keep going”.

During the fight, one of the men is knocked to the ground but gets up and continues throwing punches.

Members of the public, including elderly people and young children, can be seen looking on while some appear to be taking shelter in doorways to avoid being caught up in the incident.

The video was removed less than 24 hours after it was first posted online.

Gardai attached to Henry Street station launched an investigation shortly after they were altered to the incident.

While not commenting on the investigation, a garda spokesperson said that two men were arrested and questioned last week.

Both men were released without charge pending the conclusion of the garda investigation.