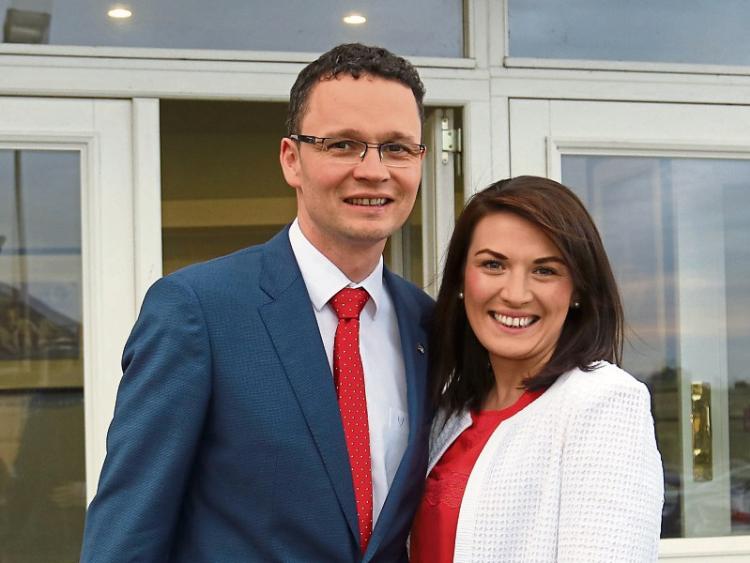 IT’S a long way from Churchtown to Rio, the newly appointed Minister of State for Tourism and Sport, Patrick O’Donovan joked when he arrived back in Newcastle West last Thursday with his new job all sealed and sorted.

There were, however, no half measures in the welcome he got.  And it was especially sweet given that he was making his own little bit of Fine Gael history.

The new Minister of State was, he said, humbled by it all. And again and again, he thanked his family, his supporters and his constituents for their faith in him. “I won’t let you down,” he had promised when he was first elected to the Dail ini 2011. And he promised it again on Thursday, now that he is a player in government.

But he revealed that he was getting ready to come home, with all hope of preferment gone, when the call from Taoiseach Enda Kenny finally came.

“It is a huge portfolio, especially in the year that is in it, ” he said. “I am delighted to come home,” he told his supporters who had waited late into the night for him  at his constituency office in Newcastle West.  “This is a huge occasion for me. To be a Minister in a government from the background I come from, the family I come from it is really a huge honour.”

And he recalled his late father John: “I know he would be so proud of me today. I have been very  blessed with the family I come from, with the family I have and the supporters I have stretching from Abbeyfeale to Doon.”

“I am delighted to come home,” the new Minister of State told his supporters who gathered at his constituency office in Newcastle West.  “This is a huge occasion for me. To be a Minister in a government from the background I come from, the family I come from it is really a huge honour.”

And he recalled his late father John: “I know he would be so proud of me today.”

"I spent most of my first term in the Dáil as a member of the Oireachtas Committee on Transport, Tourism and Sport during which time I gained a valuable knowledge of the area. I believe that this experience will be of huge value to me in my new role as Minister for Tourism and Sport,” the new minister said afterwards.

A  number of very important national and international sports events will take place in the coming months which will show case Ireland and Irish sport,  he continued. And he confirmed that he will indeed be going to Rio for the Olympics.

But he was keen to stress the importance of participation at all levels across the country.

"We have seen over the last number of years the government investment in developments in local facilities across the country and I hope as Minister to be able to continue that work into the future."

"2016 looks like being a fantastic year for Ireland in terms of tourism numbers and comes after a record year in 2015,” he added.“ I'm looking forward to leading the Government's approach to the industry both at home and abroad and working to ensure that more people look at Ireland as a place to holiday in and to visit."

Minister O’Donovan told the Limerick Leader this Wednesday he had already had several meetings with his new boss, the Minister for Transport, Tourism and Sport, Shane Ross.  And he described the meetings as very positive.

“We get on well,” he said, pointing out that both of them had served on the Public Accounts Committee.

Minister O’Donovan undertook his first official appointment in sport on Sunday when he attended the Irish Open at the K Club where Rory McIlroy was the very happy winner. And his first official duty of his tourism brief will be to launch the Wild Atlantic Way passport in Foynes this Friday.

He will be shouting for Limerick though in the clash against Clare in the Gaelic Grounds on Sunday. “I probably will have no problem getting into a Munster final now,” he laughed.

Minister O’Donovan served on Limerick County Council from 2004 until he was elected to the Dail in 2011. He was re-elected along with party colleague Tom Neville in February’s general election.