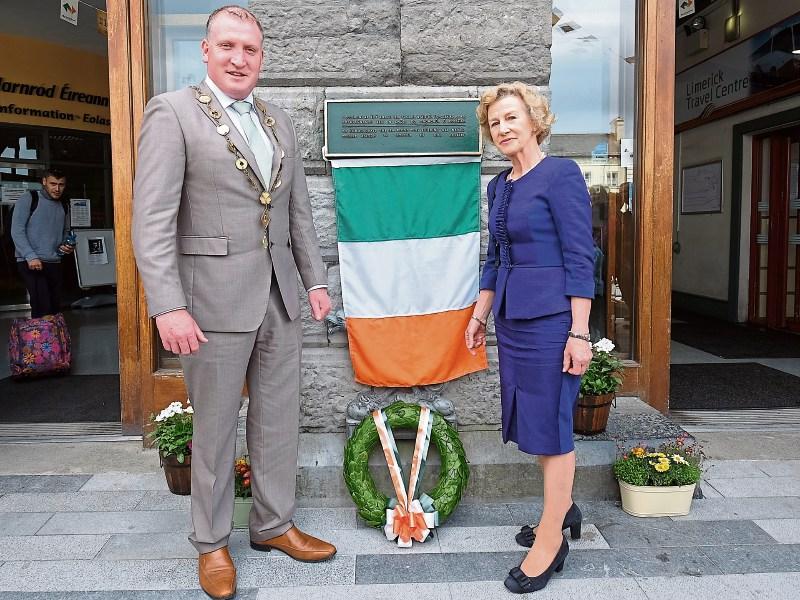 A WREATH was laid at the entrance to Colbert Station yesterday to mark the 100th anniversary of the execution of Limerick man Con Colbert following the Easter Rising.

The Mayor of Limerick City and County, Cllr Liam Galvin, attended the ceremony along with Freda Colbert-Kerr - a direct descendant of Con Colbert who was born in Castlemahon in West Limerick.

Ms Colbert-Kerr, who was born in the city, told those at the event, which was organised by Iarnród Eireann, that her cousin was an “ordinary man in an extraordinary time”.

Con Colbert – who was a member of the secretive Irish Republican Brotherhood (IRB) –  was one of four men who were shot at Kilmainham Gaol on May 8, 1916.

Fifty years later, the then government, decided to name railway stations across the country to honour those who were executed. As a result,  Parnell Street Station was renamed as Colbert Station on April 10, 1966.

Before laying the wreath yesterday afternoon, Mrs Colbert-Kerr said she is proud to be related to Con Colbert.

“In honouring Con Colbert today, we remember,  above all, his courage, vision, bravery and self-sarcifice. Con was known to be very self-disciplined, deeply religious and dedicated to the cause,” she said adding that he was also a great lover and supporter of the Irish language.

Meanwhile, a life-size sculpture of Con Colbert was unveiled at his one-time home in Moanlena, Castlemahon yesterday evening.

The sculpture is located at the gable of the house where a memorial plaque was erected in 1966, to commemorate the 50th anniversary of the Easter Rising.

Mayor Galvin, who attended both events, said the people of Limerick city and county are proud of the contribution Con Colbert made a century ago.