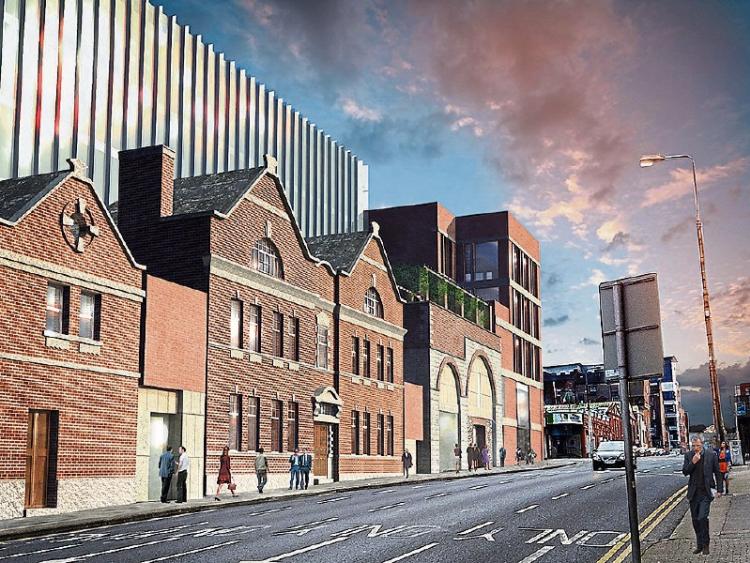 THE Limerick Leader can this week reveal how the multi-million euro conversion of the Hanging Gardens on Henry Street may appear once complete.

Having purchased the site from Nama, Limerick City and County Council is seeking to transform the building into office, retail and commercial space.

Situated at the former general post office (GPO) building - at 16 to 18 Henry Street - the area has lain idle for the last eight years, and is considered by many to be an eyesore, with the shell of the building open to the elements.

But the long-awaited development now appears to be moving ahead, with the council seeking the public's input on the proposals.

And there are high hopes that once completed, the site could provide the city centre with much needed clean office space. Previously, Finance Minister Michael Noonan had expressed confidence these offices could provide work for 250 people.

The council's plans will see the completion of the existing building, plus a new five-storey office block at the neighbouring site, 19 Henry Street, formerly occupied by Thomond Office Supplies.

Plans are in place to refurbish and repair the former GPO, the mercantile building and hanging gardens, and complete the basement.

According to planning documents, the council is proposing to remove the concrete slabs which are in the vaults of the Hanging Gardens and, in doing so, “rediscover the original proportions of this space”.

“One of the vaults could serve as the portal for the entire development, with a distinctive conference room adjacent in the larger vault. The spaces between these historic structures could include insertions, small buildings that provide ancillary facilities like a life or other services which might improve the functionality of these buildings without compromising the character of these rooms,” the document reads.

The roof terrace atop the original mercantile building will also be restored, with trees and shrubs introduced to, as the planners state, “provide a unique elevated landscape overlooking the riverside”.

Within the GPO building, the planners propose to incorporate a “simple dado panel of painted softwood boards”.

Liam Conneally, senior planner with Limerick City and County Council said members will be given a briefing session in the next fortnight.

"We will be taking them through the detail, and highlighting how important this development is in the context of the delivery of the Limerick 2030 plan," he confirmed.

Original plans for the Henry Street site by developer Robert Butler would have seen retail space at ground level, and flour floors of office accommodation over basement parking. It would have seen the restoration and integration of two protected structures - the 1903 Mercantile Building and the 1808 Hanging Gardens Building.

The building was taken over by Nama when Mr Butler fell into financial difficulty and a receiver was appointed, before the council bought the land for €13m.

The public are being invited to have their say on the proposals, which are on public display in the council’s planning offices in Patrick Street up until Wednesday, June 1.

After this, councillors will decide whether the plans can proceed as part of the part 8 planning process.