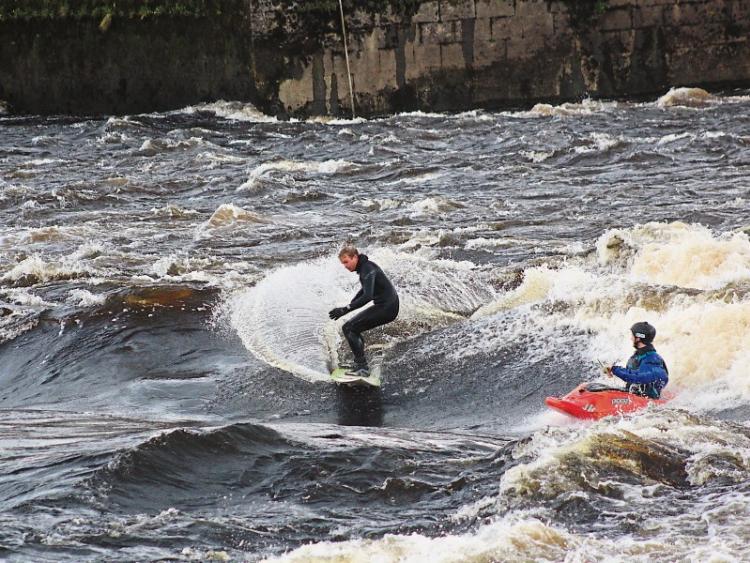 PRO surfer Jamie O’Brien paid a visit to Limerick this week, taking in the standing wave at the Curragower Falls while he was here.

The former Pipeline Masters winner, who hails from Hawaii, is the star of his own You Tube show, produced with Red Bull, called ‘Who is JOB’ and is in Ireland on a ten-day trip shooting an episode for the show, which regularly draws viewers in the hundreds of thousands, if not millions, online.

While he has been filming scenes at the Cliffs of Moher and other Irish surf spots, a lull in swell conditions brought him to Limerick, courtesy of a video posted online by UL student Paul Deering, which the Limerick Leader reported on in 2014.

“They came in on Tuesday and surfed the river wave,” explained Paul, a second year physiotherapy student who regularly surfs the river wave.

“They had a full crew of people with them, another few really good surfers as well, good camera equipment and drones, everything. They came to Limerick specially for the wave. Jamie has some ancestry in Limerick as well.

“They surfed the wave for about four hours, even though it wasn't really working - and he was still able to surf it. The tourism potential for it is absolutely massive; even on the day there was about 20 or 30 people watching the wave from the Curragower. He was completely stoked that he got to surf it and hopefully he will be back.

“This is going to put the river wave on the world map when the web series goes out. This wave is unique in Ireland, definitely the only one of its kind and one of just a few in the world,” added Paul.

“There is a wave in Munich that is a massive tourist attraction, people travel from all over to go to it. This wave is unique in Ireland, definitely the only one of its kind and one of just a few in the world. It is the fact that it is easy to catch when it gets going and it is so rippable, it would be an attraction for any pro-surfer to come and hit it up,” he added.