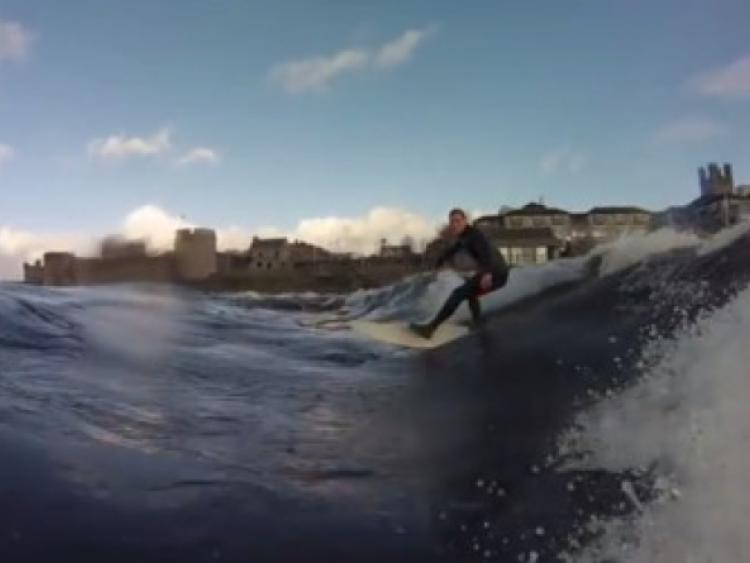 A shot from the video 'Surfing Curragower River Wave'

A STANDING wave on the river Shannon could attract top surfers from all over the globe, according to UL student Paul Deering.

The Cavan man - studying physiotherapy - uploaded a video onto YouTube showing himself and pal Kalani Moore from Wexford surfing the wave at the Curragower Falls.

“There is so much potential for that wave,” said Paul. “And there are plenty of surfers in Ireland who are an awful lot better than us who would be really able to rip it up there.

“That was only filmed over two sessions. We plan on really getting loads more footage and trying to come up with good videos,” added the second year student, who releases YouTube videos with his pals under the moniker ‘Irish Go Pro Lads’ and previously saw a video of his J1 experience in the US go viral.

The Curragower wave has long been popular with canoe-surfers, but rarely sees board surfers reap its potential. The conditions have to be right for it to work.

“Yeah they do, but during the winter it is a tidal thing,” said Paul. “It works for about four or five hours when the tide is out - the tide has to be low. You need a flow in the river, but you can ring Ardnacrusha dam and it tells you exactly what is coming down the river.”

Deering believes the Curragower Falls in Limerick could rival similar waves made popular in Europe.

“There is a river wave in Munich that attracts huge numbers - probably the best river wave in the world - and I reckon that wave, if we got people out regularly, has the potential to be as good, if not better.

“It could potentially attract surfers from all over the world,” he added.

Check out the video now on YouTube under Surfing Curragower River Wave.