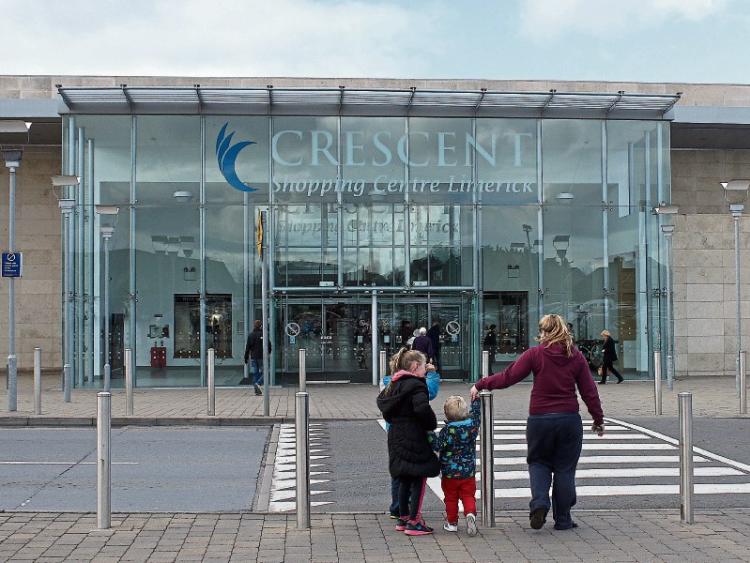 The Crescent Shopping Centre in Dooradoyle, where a 'modest' redevelopment is being planned Picture: Michael Cowhey

THE “modest” redevelopment of the Crescent Shopping Centre “will not impinge” on the status of Limerick city centre as the top retail destination.

But the proposals will ensure the retail area remains “competitive”.

That’s according to representatives of the Dooradoyle centre, which is planning to expand the retail space to create six new shop units in the centre, plus five new units outside, three of which will accommodate restaurant and cafe use.

There will be an outdoor public realm which can be used for activities such as commercial and community events. The owners of the Crescent plan to renovate the original sections of the shopping centre, including higher ceilings or improved lighting.

Several units are to be combined or extended, while others are being reconfigured.

In documents submitted to the local authority, representatives of the Crescent Shopping Centre say the plans equate to an increase of just 3.9% in terms of retail.

“This reinvestment is critical to maintaining operators which have traded along these malls for an extended period, and which now needs to be reinvented so as to assure their vitality,” representatives of the centre write.

"The proposed development seeks to ensure that the long established Crescent shopping centre remains competitive within its own functional position in the retail hierarchy, and that it thus retains its market share and tenant mix."

Having suffered from the so-called 'donut effect' which has seen suburban retail thrive at the expense of the centre, the Mid-West Retail Strategy has placed the city centre at the top of the pecking order when it comes to major development.

Councillors Daniel Butler and Joe Leddin both say they do not see the Crescent’s proposals as any threat to the centre.

Cllr Butler, who lives in the area, said the city and the shopping centre offer two different products and experiences.

“The fact they are further investing in it is yet further commitment to the locality, and it has to be welcomed in that sense,” he said.

“I think the city centre is developing a vision for where it is going, and I believe the two can work in conjunction with one another. They are two seperate offerings.”

Cllr Leddin added: “I think it is very clear what the centre needs to do in terms of footfall and maintaining its viability, and that is to fast-track the existing projects the council has control over.”