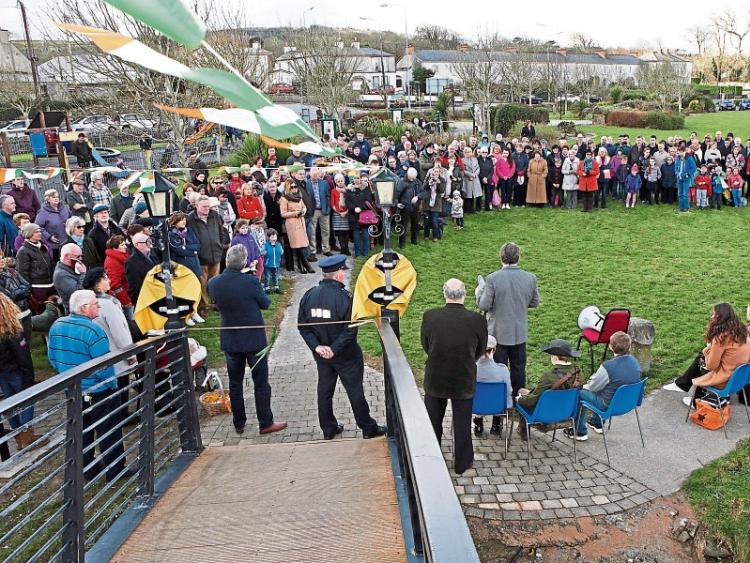 THE Centenary Bridge across the river Corbry in Glin will remain for generations to come, a powerful symbol of peace and reconciliation but also a memorial to two local men who took part, on opposing sides, in the the 1916 Rising.

The footbridge in the town park was formally named the Centenary Bridge at a commemoration ceremony last Easter Monday, when memorial plaques in honour of Constable James O’Brien and Volunteer Eamon Dore were also unveiled by their relatives.

Addressing the hundreds of men, women and children who gathered in the Town Park for the ceremony, John Anthony Culhane reminded them that 2016 “belongs to everybody on this island and to our friends and families overseas regardless of political or family background".

“In a time of reconciliation and remembrance, we acknowledge two native sons of Glin who happened to be on opposing sides in the conflict,” Mr Culhane said.

He also recalled Michael O’Connor from Ballyhahill, a civilian who died in the crossfire during Easter Week and is buried in Kilfergus cemetery.

Mr Culhane told the crowd that Constable James O’Brien, from Kilfergus, joined the Dublin Metropolitan Police in 1895 and was on duty at the gate of Dublin Castle  on Easter Monday, April 24 1916 when he was shot by Seán Connolly, a leader of a group of Irish Citizen Army men and women who were trying to seize Dublin Castle.

Eamonn Dore, from Main Street, Glin was a young medical student in Dublin when he joined the Irish Volunteers. When the Rising began, he travelled back to Dublin over two days, arriving there on Easter Tuesday. He was a courier for Sean MacDermott, one of the signatories of the Proclamation of  Independence.

He was imprisoned in Britain along with hundreds of Irish Volunteers but was later released  and married Nora Daly, herself a rebel and sister of Ned Daly, the Limerick man executed along with Con Colbert and 14 other leaders after the Rising.

“It was all about us kids,” she said, adding that the events of 1916 were never spoken about in a negative or sad way.

Local garda Billy McElligott spoke on behalf of An Garda Síochána, and explained that Constable O’Brien was one of three uniformed policemen who were killed during the Rising.

The ceremony included contributions by various local school pupils. Enya McIntrye recited the poem Mise Eire while Seán Adams recited his own poem, also as Gaeilge, about the Rising. Róise McIntyre read out a section of the 1916 Proclamation and Leo

Buckley sang the song Grace, about the marriage of Grace Gifford and Joseph Mary Plunkett on the eve of Plunkett’s execution. Earlier, a dozen or so musicians from the local Comhaltas Ceoltóirí craobh entertained the crowd in bright but chilly sunshine while a quartet of young dancers danced their reel around a square of grass.

“It is a great day for Glin,” said Cllr John Sheahan (FG). But he added that it was incumbent on all of us to take on board the words of the Proclamation.

“One hundred years on, we still have work to do to fulfil the words of Pearse and his followers that nobody should be alienated. That is what we should strive to do,” he said.

Fr Tom Crawford intoned St Francis’ prayer for peace and blessed the bridge in honour of all those in uniform who gave their lives and dedicated their lives to the building of our nation. A big price was paid by many, he said.

“We are now beneficiaries,” he said. “Let us for ever treasure the gift handed on to us. Let us be people who work for and keep our freedom safe. A lot of bridges need to be built still.”

The bridge is a symbol of crossing a divide, said artist Val O’Shaughnessy who wrote a poem for the occasion which she read.

“I would be a listening ear, a compassionate heart, a grounding presence,” it began, finishing with the words, “Wherever you go, be a bridge.”

The ceremony ended, teas were served and more singing and playing followed in the nearby sheltered housing complex.