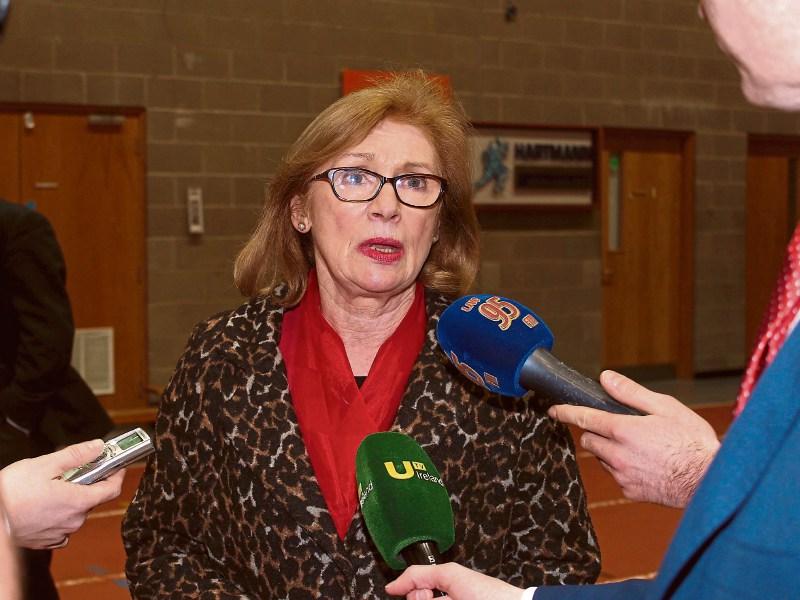 Minister Jan O'Sullivan talking to reporters at the UL Arena

THE vote in Limerick City is heading for a grandstand finish, with Education Minister Jan O'Sullivan moving to within just 176 votes of Kieran O'Donnell in the race for the final seat.

Before the fourth count, Ms O'Sullivan's supporters were conceding the long serving Labour deputy was unlikely to hold her seat due to a backlash against the government.

When she arrived at the UL Arena herself, Ms O'Sullivan admitted her chances of winning were slim.

However, a transfer of 835 votes from Social Democrat candidate Sarah-Jane Hennelly has put her right back in the race for the fourth seat.

His transfers are now being distributed, with all eyes on where they will go to.

After the fourth count, Finance Minister Michael Noonan had clikmbed to 8,591 votes, with Mr O'Donnell on 7,177 votes.

Speaking following the fourth count, Ms O'Sullivan said: "I think it is still all to play for. It's a sizeable number of votes. Some of them will not go to anybody, as they are AAA, but it remains to be seen where the rest of them go. I think I am back in the frame more or less.I thought it was too big a gap, but I got a good transfer from Sarah Jane Hennelly, so I think I am back in the fray.The fat lady hasn't sung yet. We'll just see how it goes!"

Supporters of Fine Gael are now downbeat, with some privately conceding Mr O'Donnell's seat is now under serious threat from the Labour TD.

Labour campaigner Joe Kemmy said: "We are right back in the race again after the the transfer from Sarah Jane Hennelly to Jan, of 835 votes. It reminds me of 1997 when Jim Kemmy was written off. It's history repeating itself."

The result of the fifth and final count is expected in the next hour.