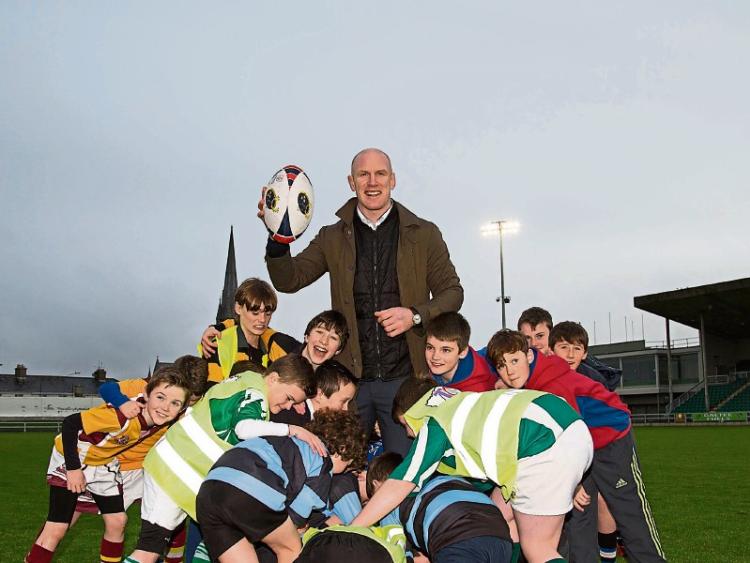 Underage rugby clubs from across the county have joined forces with Paul O’Connell in a bid to tackle litter for TLC2 Picture: Alan Place/Fusionshooters

LIMERICK’S most iconic leader, rugby legend Paul O’Connell, has issued a rallying cry to the people of the city and county to sign up for Team Limerick Clean-up 2.

“We want people to sign up first and foremost,”  said the former Munster and Ireland talisman Paul O’Connell.

“The reason it was such a success last year – we had over 10,000 people out – is the simplicity of the whole thing.”

The retired Ireland rugby captain who participated in last year’s clean-up along with his son Paddy is urging people to give up a few hours of their time on Good Friday to get involved in the fun and worthwhile event.

“On Good Friday, apart from religious ceremonies, there isn’t a whole lot else to be doing and I think the big thing is to get your kids out, or your kids to see you out. It’s all about creating habits here,” added Paul, who was speaking on the Limerick Today Show on Live 95FM.

The TLC initiative is sponsored by the JP McManus Benevolent Fund and is co-ordinated by Limerick City and County Council with the support of  the Limerick Leader, Mr Binman and Live 95FM.

“We have 29 schools on board at the moment. We would really like to get more sports clubs involved and local businesses involved as well. I think over 200 outlets have received branded material to display in store to encourage customers to dispose of their wrappers, cups and cans. That’s the big thing – to get as many people out.”

Such was the success of last year’s TLC endeavour that Dublin is following Limerick’s lead and hosting their own major clean-up event.

“It’s fantastic that we are setting the standard. There is one in England too. It’s the Queen’s 90th birthday and there is a Clean for the Queen. But we are one of the first out of the blocks this year and I think we have done it better than anyone. To have the numbers we had last year was absolutely incredible and hopefully we will have more out on the streets again this year.”

“You sign up on the website, we will send you out everything you need for the day from gloves to pickers to hi-viz vests to bags and you literally go out for two or three hours and you pick up some litter. If you’ve kids, you bring them along with you and hopefully they will learn through your leadership that this is what you should do, this is how you look after where you live,” Paul added.

Those taking part can also access the information pack on-line and get some great tips for collecting litter as well as downloading an event poster to distribute locally.