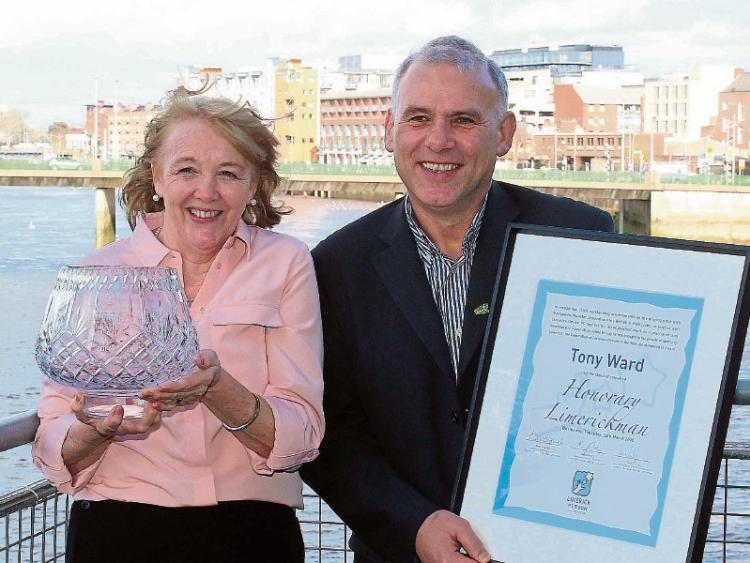 Ann Lee accepts last year's award for her son Andy, with Tony Ward, who was given a special presentation

THE recipient of the 2015 Limerick Person of the Year award will be revealed this Thursday at a gala ceremony at the Clarion Hotel.

Again this year, there are 12 outstanding candidates in the running for the prestigious award which will be announced at the lunchtime ceremony.

The special guest at this year’s awards ceremony is one of the country’s leading businessmen, Denis Brosnan who resides in Croom.

“We're delighted to have Denis Brosnan as our guest of honour. Mr Brosnan is being honoured in recognition of his outstanding contribution towards the revival of Limerick and the Mid-West region, at a time when leadership and vision were so badly needed,” said Alan English, editor of the Limerick Leader, co-sponsors of the Limerick Person of the Year awards along with media agency Southern and the Clarion Hotel.

“Denis Brosnan has made a notable contribution to the wider community thanks to his leadership skills that motivate those around him to get things done.

“His continuing efforts as chairman of the Limerick Economic Forum ensure that the excellent progress already made is sustained long into the future,” added Mr English.

The Limerick Person of the Year awards cover a broad spectrum of accomplishments, ranging from excellence on the sporting field, to community endeavours which make a positive contribution to local society, to invaluable contributions to education and business in the Mid-West region.

Mr English said that each year the ceremony is an opportunity to recognise the exploits of people from all walks of life who have made “a fantastic contribution to Limerick city and county.

“This event is an opportunity to honour the unsung heroes of Limerick - people of courage and ability who carry out the most remarkable feats. Again this year, the 12 nominees are a shining example of what the true spirit of Limerick is all about.

“The judges have just met to agree on who should be the overall Person of the Year recipient and it was by no means an easy decision.

Last year’s winner was boxer Andy Lee, while rugby legend Tony Ward was given a certificate as an ‘honorary Limerickman’ for his exploits with the Munster Rugby team.