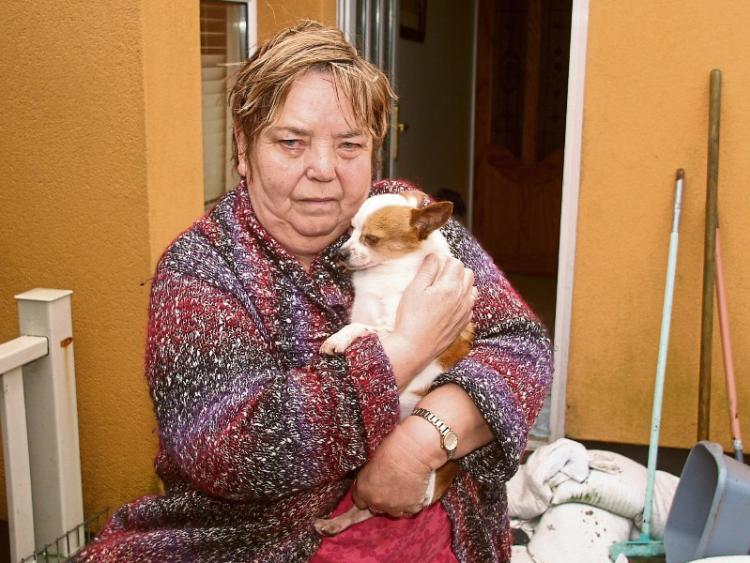 Margaret Ryan, 64, with her pet dog Tiny, whom she saved during the unexpected flooding Picture: Adrian Butler

FAMILIES in Corbally have been left “devastated” after Storm Imogen hit Limerick in the early hours of Monday morning and left houses badly damaged by flooding.

Margaret Ryan, of Mill Road, had more than 10 family members and neighbours help her and her husband combat the flood water that first entered her home at 4.30am.

The 64-year-old told the Limerick Leader that new flooring and furniture were “ruined”, and were purchased after her home was flooded, two years ago.

“Everything in our house was flooded [two years ago], and everything went out in skips. And all of this here is brand new. All the walls were newly plastered. And now we are back to square one.”

Ms Ryan said that her priority was to save her three brown labradors and her small puppy, Tiny.

“I kept him up out of the water. We had to save our other dogs as well. I had to ensure that they were safe,” she said.

Ms Ryan’s grandson, Thomas Walsh said that when he and other family members arrived at 5am, he “could have went swimming in the kitchen.

“When I came along, there was water everywhere. I was there at the door, and I was trying to stop it with my uncle, trying to sweep it out and it just kept coming in, and there was nothing we could do to stop it.

“We started seeing results when the tide was gone out. But still now, there is water coming up through the floor. It’s gone underneath and it is still soaking up through. There is nothing we can really do now; just wait until the tide comes back in, and hope the water doesn’t come back in. We are just at the hands of Mother Nature,” the Corbally man said.

Meanwhile in St Mary’s Park, St Ita’s Street was “completely flooded”, leaving many residents trapped in their homes until emergency services were able to clear some of the water by 11am. Resident Seany Quinlivan said that his son missed out on a doctor’s appointment as a result of the flooding, and said that he was “lucky” to avoid water entering his home.

“It came up to the final step of the porch, and we were lucky that we had that kind of height. There are lots of people who missed work because of the flooding. Schools have also been affected,” he said.

Council emergency staff and outdoor crews were responding to the flooding until the late evening in some areas, including St Mary’s Park and Corbally.

Limerick Fire Service incident commander, Mark Manning said that there were no reports of houses damaged by floods in St Mary’s Park, on Monday.

A spokesperson for the Council said that an Office of Public Works storm surge forecast predicted a surge approximately 450mm, with an error band of plus/minus 150mm for around 6am, on Monday.

“In reality the surge measured in Foynes was approximately 1.5m on top of a 5.2m high tide,  giving a total water height of approximately 6.7m.”