Limerick businessman aiming to make the web safer for kids

With parents increasingly concerned at what their children view online, a new social network for kids has been launched 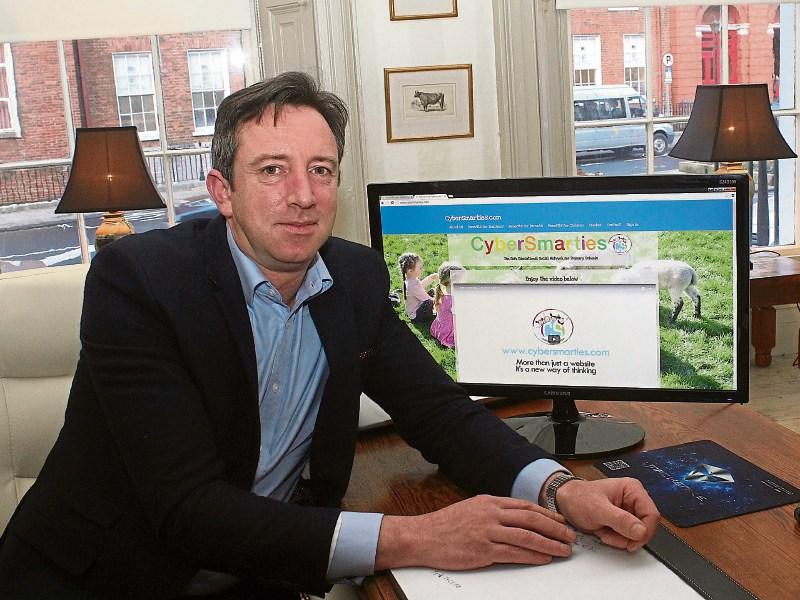 Former city of London headhunter Diarmuid Hudner, who hails from Effin, at the Cybersmarties office in the city. Below, with Ul grads Brendan Woodage and Wenqian Xu Pictures: Adrian Butler

Children are technology mad, with it rare to find a youngster not having at least some access to the internet – and social media pages.

From cyberbullying among their peers to far greater dangers, parents need to be extra vigilant with what their children are viewing online.

Now, a Limerick businessman has designed what is believed to be Ireland’s first ever social network for children, operating from the heart of the city.

Effin man Diarmuid Hudner, a former headhunter in the City of London, has designed ‘Cybersmarties.com’, which he describes as a “safe educational social network for kids”.

Working with University of Limerick graduates Brendan Woodage, Charleville and Wenqian Xu, Castletroy at offices in the Crescent, almost 40 schools have already signed up their children to use the web site, mainly from the Mid-West region. 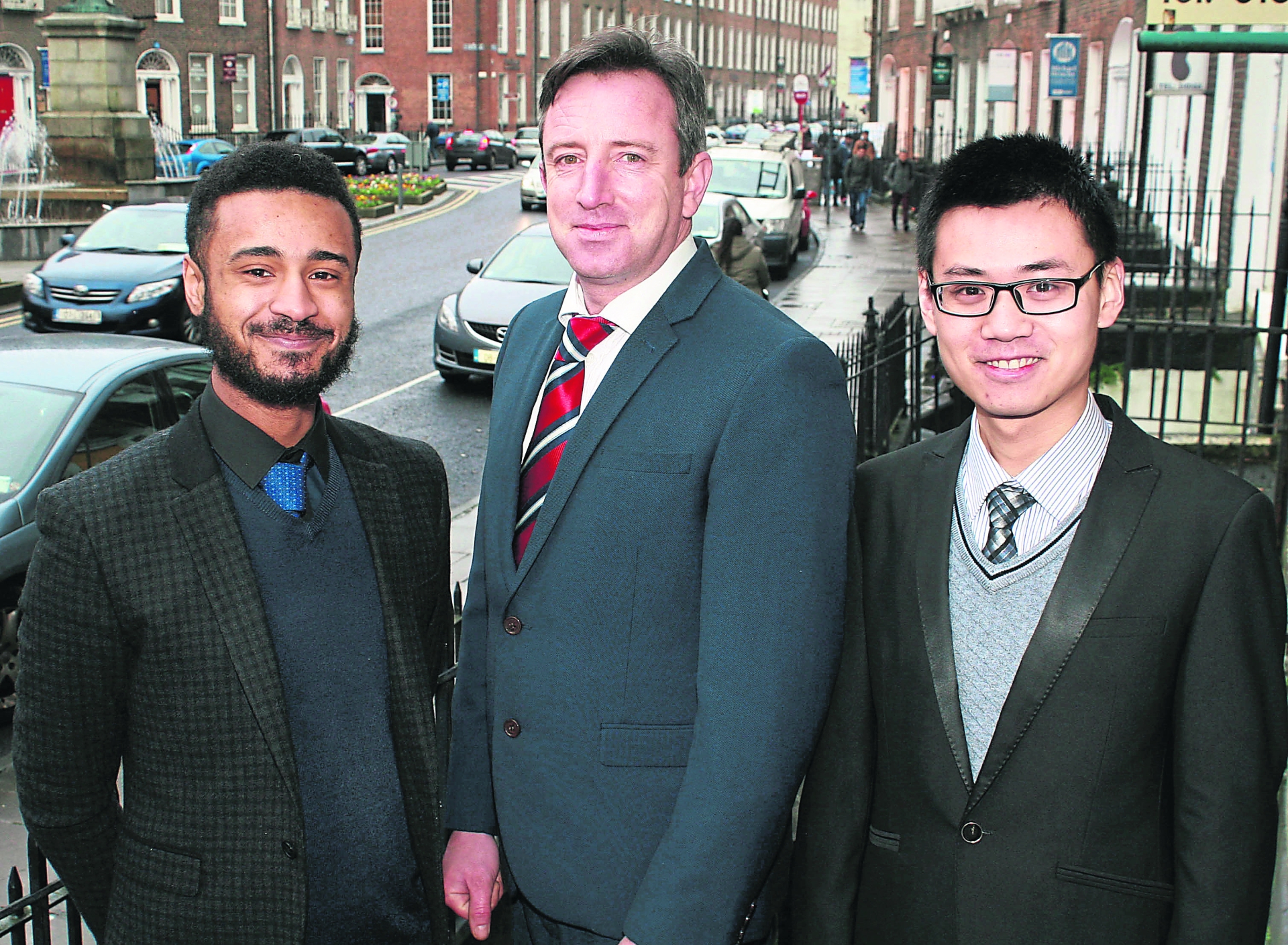 Similar to Facebook – with like, share and commenting functions – the network is aimed at primary school age children. No adults are allowed on the site, save for school teachers, who act as ‘moderators’, and as a way to verify the identity of children signing up.

This is why Diarmuid targets schools en-bloc to join the site.

Unlike Facebook, the site has a variety of built-in features designed to ensure children do not engage in cyber-bullying – and learn at an early age this is not the way to behave.

“On the messaging itself [when children message one another], there is a behavioural content filter which blocks negative words. With children it is all about speed of messaging, and when you block words individually, they are not allowed to send a message if the word is listed. In tests we have done, we found, because they had to change negative words, in the space of a very short space of time, literally four to five days, because it slowed them down, they stopped using negative words. It was a very simple thing in that respect,” Diarmuid explains.

Where some words do ‘fall through the net’, as it were, Diarmuid says children are encouraged to immediately report this.

“When they do this, there is an automated system which asks the child ‘why are you reporting this?'. The responses we find tend to be emotional basis. The child who sent the message has his account temporarily shut down. The content of the message is sent to the teacher, who has a look at it. It allows the teacher who knows the child to interact with them very early on and say: ‘it is not nice to send a message like this,” Diarmuid explains.

On top of this, no pictures are allowed of children, just cartoon figures to help prevent judgemental comments based on appearance.

He believes this will leave children “positively conditioned” towards social media, before they advance towards Facebook, which has a minimum joining age of 13.

“There is nothing wrong with social media. We just haven’t been taught how to use it, ever. I liken it to the thing now of basically the driver’s licence in a way. My parents were given their licence. They bought their licence – there was no driving test at the time. I think for your safety and the safety of others, you have to be educated how to use it in the same way you have a practical test for driving,” Diarmuid states.

Prior to setting up Cybersmarties, Diarmuid wrote a book entitled ‘I’mHappyNow.com’, a self-published title which draws on the experiences of three young people, victims of bullying, and looking at how they tackled this.

Effectively, it was this book – and its response – which led to the setting up of this social media site, for which Diarmuid says he has sunk huge sums of money into.

“After this book, I was looking into cyberbullying in a big way. I could see where there was a problem in this area. It took me a long time to figure out what was the best way to change it, and the only way you do this is to change behaviour. I was initially thinking of targeting Cybersmarties at secondary school students, but we were not going to change anyone who has already been pre-taught,” he said.

'Cybersmarties.com' is very much in its infancy – when the Limerick Leader visited its Georgian offices, furniture was still being brought in, boxes were still being sorted.

Despite this, Diarmuid has big plans for the site, targeting a trebling of its size by the end of this year, plus developing an equivalent version of Cybersmarties for young children with learning difficulties.

While other social media companies operate from shiny new offices in high-profile locations, the Effin native says it was “never in my mind” to set up anywhere other than Limerick.

A social network specifically aimed at school children is, by its nature, likely to attract some unsavoury characters.

But Diarmuid says with its model of getting schools, rather than individuals to sign up, this will help eliminate this problem. A €20 annual charge – with the parent most likely using their credit card to pay – also ensures a further level of security, plus a guarantee the web site is free from advertisements.

“We know all the kids are real kids in schools. The school basically will tell us they have 100 members who want to go on. These are real children. The big thing too is we keep no data. We issue a user-ID number and a password to the school. We don’t know who the kids are,” he explains.

The bottom line, Diarmuid feels, is that while children as they progress through their early years, have no concept of Facebook until they reach a certain age.

“I would hope their first experience of social media will be us. Kids have no preconceptions of what they can and cannot do on social media.

So they are being taught in a wholly different way than anyone before was taught. It is a generational shift in thinking,” he concluded.

For more information, see www.cybersmarties.com, where a free one-month trial is available.