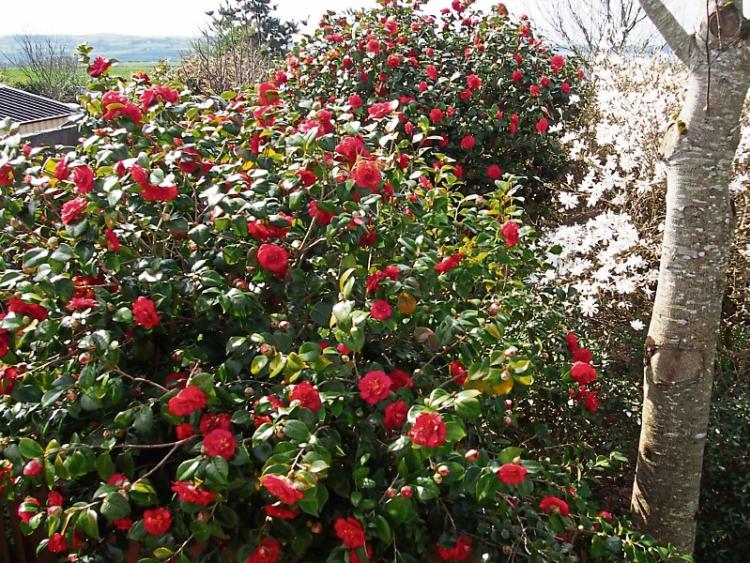 Since the New Year we had no idea from one week to the next what the weather would be like, frost, rain and icy cold winds. As we move into April we know that, no matter what happens, things will definitely start to grow.

Camellias are in full flower for the last few weeks. Many flowering plants lack lustre after flowering, the camellias dark glossy foliage always looks well. In summer they produce fat buds which nestle among the green leaves for several months before opening out to produce flowers which range in colour from white to pink to red. The camellia originated in China and Japan where they were cultivated thousands of years ago. They were very popular in Victorian times after which interest in them waned. In the 1930’s the English gardener Williams produced a number of new hybrids which were hardier and more free flowering. There are many varieties of Camellia x williamsii available. Camellia japonica is one of the most popular species with a great number of varieties.

Camellias are easily grown in open ground or in pots. They like a neutral or acid soil. If your soil is limy grow them in containers in a lime free compost. They love warm wet summers and cold dry winters. Plant camellias in dapple shade because early morning sun will turn the petals brown especially in sun, an ideal location would be on the west side of a wall. Camellias may be pruned in spring after flowering to keep the plant bushy and restrict its size. When planting camellias add a generous supply of humus and peat. Do not plant too deeply, the base of the stem should be slightly higher than the surrounding ground. A good layer of mulch on top of the soil will retain moisture and protect the shallow roots.

The recent variation in soil temperatures has led to the early the growth of grass but with all the snow and frost many have been slow to start cutting but in the hopes that more stable and warmer weather will be norm now time to look after your lawn. One of the biggest problems with lawns in our climate is the growth of moss. One way to treat moss is with a three in one lawn weed, feeder and mosskiller. A 20kg bag, available at garden centres, will cover 300 square metres of lawn. Apply at the rate of 68 grams per square metre, a few days after cutting the grass and do not cut the grass again for at least 4 days after application. This mixture contains ferrous sulphate (sulphate of iron) which kills the moss and broad-leaved weeds, it gives a dark green colour to the grass. The moss can also be killed by spraying the lawn with a dilute solution of sulphate of iron dissolved in water, using a watering can with a fine rose. When the moss is dead. Scarify the lawn using a wire rake or use a powered scarifier which can be hired from your local plant hire firm. Lawns need constant cutting during the growing season, at least once a week.

Harden off seedlings of vegetables grown in the glasshouse before planting out in the garden. Place pots and trays outside during the day and move them back under cover at night. Do this for a week or so until the plants are hardened off enough to plant outside.